You’ve probably heard of Prairie Artisan Ales’ coffee stout — Bomb! — which can be hard to get when released. It sits at number 106 on Beer Advocate magazine’s current list of the 250 Top Rated Beers along with five other Prairie beers. This week, I’m taking a look at three of their current releases.

In 2012, Oklahoma-based Krebs Brewing Company started brewing under the name Prairie Artisan Ales. The goal was to create a brewery that was adventurous, that pushed the boundaries. Making their name on strong stouts and farmhouse sours, Prairie also stood out on shelves and in social apps with their bold, colorful labels.

A year ago, they began canning with their coconut and vanilla flavored imperial stout, Paradise. While not every beer they produce is canned, I want to share a few that are. Happily, they’ve carried over the eye-popping artwork to these beers. 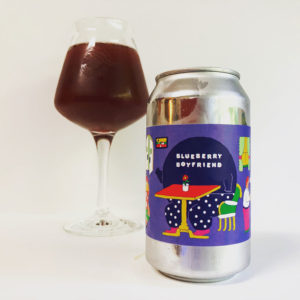 I have not had the pleasure of exploring Prairie’s offerings, sour or otherwise. So, I had no idea what to expect with this blue sour.

The aroma was a mix of blackberries and blueberries with a tang of malt vinegar and a bright lemon juice. The flavor is tart with a short, fruity sip that doesn’t linger with an aftertaste.

The purple-blue color is spot on with this refreshing sour. Blueberry Boyfriend reminds me more of a tart blueberry lemonade than a sour ale as any maltiness is masked until it warms a bit. Even then it’s only evident at the end of the sip. This is a lovely sour for those who don’t care for the style. 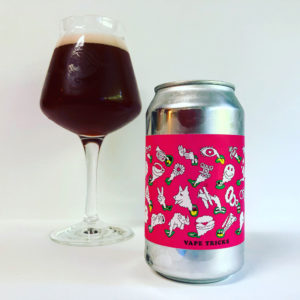 First, how awesome is that wine red color?

Inhaling, I get sour cherries, baking soda and lemon. The sip is slightly tart with a good cherry flavor that ends with a lightly sweet maltiness.

Wine red in color, this refreshing sour looks like it tastes.

This is a relatively simple beer — perfect for backyard hangs. Whether you pour it into a glass, a Solo cup or drink it straight from the bright pink can, Vape Tricks is perfect for Summer. 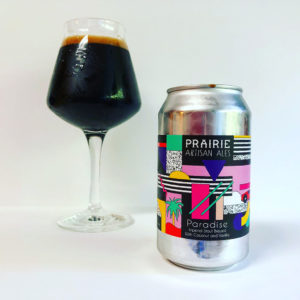 When I saw this, I immediately thought of Maui Brewing Company’s Black Pearl imperial coconut porter. It makes sense — they’re both dark beers brewed with coconut. But that is where the similarities end. Paradise is dessert in a glass.

I was reminded of a magic bar — there’s some chocolate and coconut and a whole lot of vanilla. I got licorice, toffee, toasted coconut and s’mores in the aroma. But the flavor was all sugary vanilla upfront with chocolate, coconut and a slightly bitter finish.

Join Dominion Wine & Beer on Friday, July 13th from 5 to 7 p.m. at their weekly beer tasting with Bell’s Brewery, Old Ox Brewery and Dogfish Head Brewing Company. And don’t forget your growler for a fill-up from the rotating options.