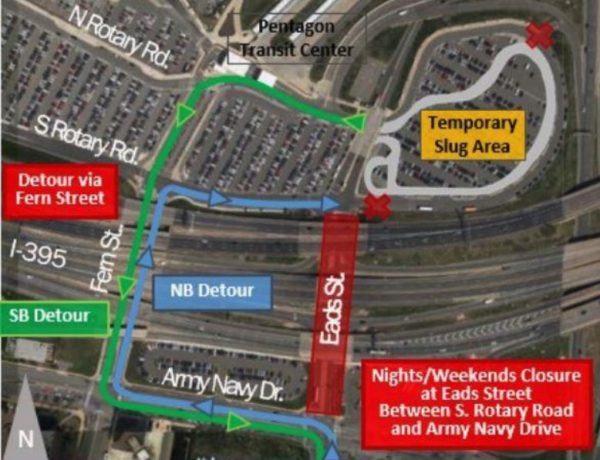 Construction around one of the Pentagon’s parking lots kicking off this week could produce some big headaches for drivers and bus riders alike.

Starting this morning (Monday), work will shut down the west side of S. Eads Street from Army Navy Drive to where it nears the Pentagon’s south parking lot at S. Rotary Road.

That will shift both northbound and southbound traffic to the east side of the street. In the mornings, from 6 a.m. to 9 a.m., that will cut off access to I-395’s northbound HOV lanes and Army Navy Drive from S. Rotary Road. Crews will post a detour and drivers should follow signs. In the same time period, access to northbound S. Eads Street from the right lane of S. Rotary Road will be reserved for anyone heading for I-395’s southbound HOV lanes.

Construction will include “median reconfiguration, road widening, pavement and drainage work,” according to VDOT, prompting some major traffic snarls.

“As current traffic volume along Eads Street is near capacity during peak periods, we expect significant traffic congestion and delays along Eads Street,” VDOT wrote in an advisory. “Periodic nighttime/weekend closures may also take place to complete the construction activities.”

VDOT is recommending that drivers looking to reach the I-395 HOV lanes during the construction to use the ramps near the Pentagon’s north parking lots at Boundary Channel Drive instead.

VDOT says work will shift to the east side of S. Eads Street sometime this fall, then last for an additional two months. The construction is included as part of the broader project focused on the I-395 express lanes.