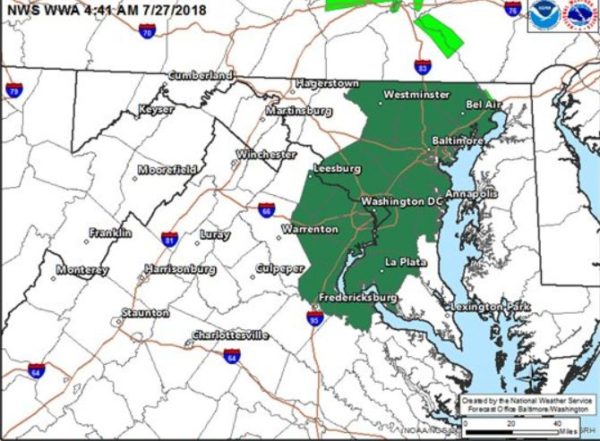 The NWS has issued a severe thunderstorm watch through 10 p.m. tonight, with a flash flood watch as well from 3 p.m. to 11 p.m. due to the excessive amounts of rain the region’s seen recently.

Showers and thunderstorms are expected this afternoon and evening as a cold front approaches the area. Both severe weather and flash flooding will be possible in association with these storms. For additional details visit https://t.co/o2JIHfMyKQ pic.twitter.com/JRDudNNHFT

Full details from the NWS:

The Flash Flood Watch continues for

* Showers and thunderstorms are expected to develop late this
afternoon and evening, with heavy rainfall rates likely. Given
saturated soil from this week`s excessive rainfall, any
additional heavy rain or repetitive thunderstorms may result in
rapid rises of water in streams and low lying areas.

A Flash Flood Watch means that conditions may develop that lead
to flash flooding. Flash flooding is a very dangerous situation.

You should monitor later forecasts and be prepared to take action
should Flash Flood Warnings be issued.