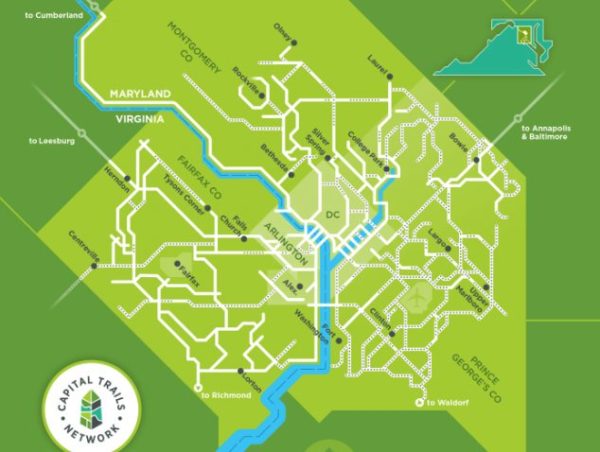 A coalition of bicycling and transit advocates has drawn up a new map of the entire D.C. region’s bike trails, in a bid to promote a more holistic view of the area’s biking options.

The Capital Trails Coalition released the “diagrammatic map” today (Monday), displaying not only the 436 miles of existing trails across the region but also another 302 miles of planned paths that will someday create even more connectivity for cyclists.

The coalition, which includes both local government transportation agencies and a host of advocacy groups, included bike trails in six jurisdictions around the region on the map: Arlington County, Alexandria, D.C., Fairfax County, Montgomery County and Prince George’s County. Coalition Chair Jack Koczela hopes that will help people to see cycling as a viable option no matter where they live around the D.C. region, laying out a clear, unified guide to easily bikeable trails for commuting and recreation alike.

“We hope this comes to have the feel of the iconic Metrorail map,” Koczela told ARLnow. “This is so people can get an idea of what it is we’re talking about in terms of actual trails available to everybody around the region.”

Koczela says the coalition has spent more than two years now drafting the map, as the group sought to work with cyclists to identify trails that are both easy to ride and provide good access to the region’s activity and transit centers.

He’s hoping that the map will prove particularly useful to D.C. suburbs like Arlington. If commuters currently rely on cars or public transit to get to work because they aren’t sure how a trail that starts in Arlington connects with one in D.C., or even Maryland, he foresees this map being a vital resource to provide alternatives.

“A lot of people’s experience on trails is really hyperlocal, and a lot of people aren’t thinking of these trails as a way to connect them to other areas of the region,” said Carm Saimbre, communications coordinator for the Washington Area Bicyclist Association, a coalition member. “The vision with this is to create connections and fill gaps in the network, so it becomes just as established as getting around the Beltway by car.”

With so many planned trails included on the map, Koczela notes that the document is certainly an aspirational one in many respects. In Arlington alone, the map includes not only trails currently under construction, like a new section of trail alongside Washington Blvd, but also ones still in the planning stages, like the extension of the Mt. Vernon Trail from Theodore Roosevelt Island.

But by showing just how adding more trails could better connect the region, Koczela thinks the map will be a valuable tool as his coalition lobbies for more funding for bike infrastructure going forward.

“Our goal for the next year is to increase awareness and get the political community engaged, thinking about the trails as a network,” Koczela said.

Photo via the Capital Trails Coalition