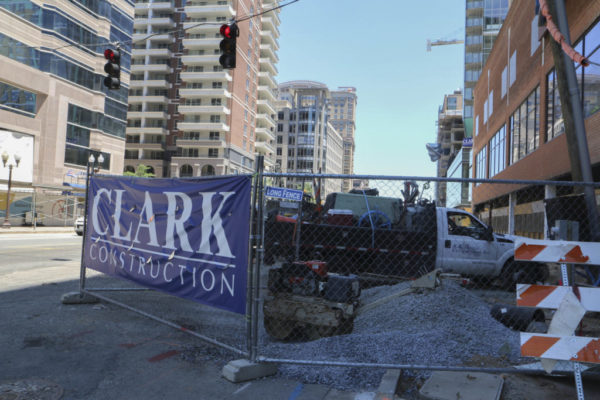 (Updated Aug. 20 at 2:30 p.m.) An Arlington woman says she was weaving through the construction at the Ballston Quarter development when she saw something she could hardly believe.

Taylor, who requested that ARLnow withhold her last name due to safety concerns, was bound for the Sport and Health gym early Tuesday morning (Aug. 14), when she spotted a group of workers near the former mall’s elevators. One of them, she noted, had Nazi symbols tattooed all over his arms and neck.

“I was just surprised a company would allow their worker to wear a tank top with such tattoos on his neck and arms,” she told ARLnow.

When her workout was wrapped up, Taylor, who is black, made her frustration with the situation clear to a Ballston Quarter employee nearby. She then grabbed her phone and opened up Twitter to make it clear just how she felt about what she saw.

Because she mentioned the construction company overseeing the work at Ballston Quarter, Clark Construction, in the tweet she says she soon heard from the company that they were investigating the situation, but otherwise heard nothing.

Since then, however, the company says it determined that the man Taylor saw was an employee of one of its subcontractors at the site. A spokeswoman for Clark did not offer additional details on whether it could confirm what Taylor saw, but it seems she was not mistaken.

“Clark Construction became aware of a violation of its anti-harassment policy on a job site in Arlington, Virginia and immediately took steps to investigate,” Brian Abt, division president and CEO for Clark’s Mid-Atlantic region, wrote in a statement. “Clark engaged the subcontractor employee who was involved and has taken appropriate action to resolve the situation.”

A spokeswoman for Clark also did not clarify whether that action included firing or otherwise disciplining the employee involved.