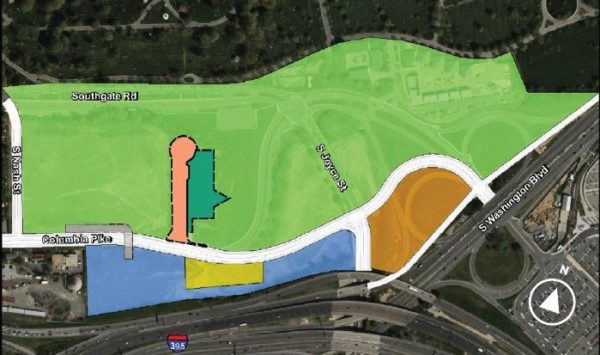 (Updated at 10:55 a.m.) Plans for a roughly 70-acre expansion of Arlington National Cemetery are now moving ahead, in a bid to help the burial ground manage demand through the 2050s.

The cemetery and U.S. Army Corps of Engineers released a new environmental assessment Friday (Aug. 17) of the planned expansion to the cemetery’s south, recommending that the effort go forward after years of study.

In all, the expansion would not only create room for up to 60,000 additional interments, freeing up room in the rapidly swelling cemetery, but also prompt a major traffic realignment around heavily trafficked roadways like Washington Blvd and Columbia Pike.

“This is a critical milestone in progress and the important steps our nation is taking to extend the life of Arlington National Cemetery well into the future,” Karen Durham-Aguilera, executive director of Army National Military Cemeteries, wrote in a statement.

The cemetery plans to use several parcels of land surrounding the Air Force Memorial for the expansion, eventually incorporating the memorial into the cemetery. The land includes the former Navy annex site, and several other acres of land controlled by the county near S. Joyce Street and Washington Blvd — including some that the county once planned to use for a streetcar maintenance facility for the scuttled Columbia Pike project.

The county had also hoped to negotiate a land swap with the Army to make the expansion happen, but those plans fell apart last year. The Army now plans to buy the land from the county instead.

The expansion will also result in a host of changes to roads in the area, many of which the county has long planned, including:

The cemetery plans to hold a public meeting on Wednesday (Aug. 22) to discuss the expansion. It will be held at the Sheraton Pentagon City hotel (900 S. Orme Street) from 5-8 p.m.