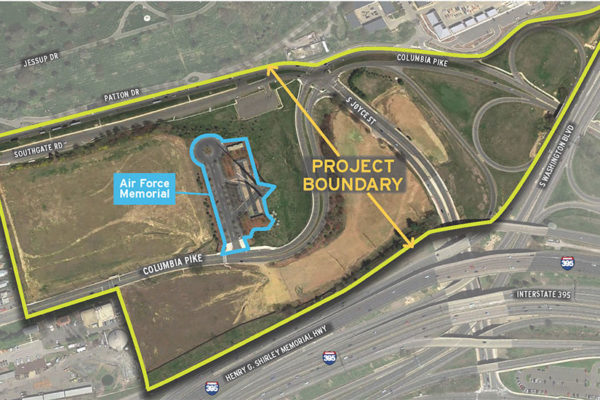 The U.S. Army has decided against pursuing a land swap with Arlington County as part of its plan to expand Arlington National Cemetery.

Instead, the Army announced it will use all the former Navy Annex site along Columbia Pike for the cemetery’s expansion. It will also look to acquire about five acres of public land now owned by Arlington County and more than seven acres of state-owned public land.

Both sides agreed to the original swap in 2013, which would have provided the county with land south of a realigned Columbia Pike. The county had hoped to use that land for various public facilities.

“While we are disappointed that Arlington County will not receive any land in this area for county needs through a land exchange agreement, we are committed to working with the cemetery to support one of our nation’s most cherished and hallowed sites,” County Manager Mark Schwartz said in a statement.

County officials said they will negotiate for fair compensation for its land and for commemoration of Freedman’s Village, a camp for former slaves that was later subsumed by the cemetery, Pentagon and Navy Annex. They also promised that both Columbia Pike and Southgate Road will be realigned.

The planned expansion of the cemetery will create space for more than 25,000 new graves.

More from a county press release after the jump:

The U.S. Army has informed Arlington County that it will no longer pursue a land exchange with the County. The Army has said it will use the entire former Navy Annex site, along Columbia Pike, to expand Arlington National Cemetery.

“While we are disappointed that Arlington County will not receive any land in this area for County needs through a land exchange agreement, we are committed to working with the cemetery to support one of our nation’s most cherished and hallowed sites,” Arlington County Manager Mark Schwartz said.

The Army’s decision means it intends to retain all federal land at the former Navy Annex. It also will acquire for the cemetery about five acres of public land now owned by Arlington County and more than seven acres of public land now owned by the Commonwealth of Virginia that support the existing transportation network. The Army originally had proposed, and Arlington had worked for years to achieve, a land exchange agreement. The agreement would have provided Arlington with land south of a realigned Columbia Pike that the County had hoped to use to meet a variety of public facility needs.

“There will be no land exchange, but Columbia Pike and Southgate Road will be realigned and the Columbia Pike/Washington Boulevard interchange will be modified,” Schwartz said. “The realignment of Columbia Pike and the multimodal improvements that will be made in this corridor not only will improve the transportation network, but also will allow us to upgrade the streetscape that will serve as a fitting boundary for Arlington National Cemetery, the Air Force Memorial, the Pentagon Memorial Visitor’s Center, and other uses in this segment of the Columbia Pike corridor.”

The realigned Southgate Road will carry traffic coming to and from Joint Base Myer Henderson Hall. The Realigned Columbia Pike will be rebuilt in a manner consistent with the County’s Columbia Pike Multimodal Project, as a four-lane roadway with a sidewalk and a shared-use path, improved landscaping, enhanced lighting and undergrounding of utilities.

Arlington National Cemetery is projected to run out of burial space in the early 2040s. The roadway realignment and the land that will be acquired from Arlington County and the Commonwealth will provide 38 more acres of contiguous burial space to accommodate approximately 50,000 more burial spaces, extending the closure date of the Cemetery until the mid-2050s, based on the current demand and internment rates.

The County now will negotiate with the Army to ensure that Arlington and its taxpayers receive fair compensation for the County-owned land as the Army pursues its acquisition, Schwartz said. The County also will work with the Army to commemorate historic Freedman’s Village in a meaningful way at a site as close to the original site of the village, as possible. The original village was located just north of the Navy Annex site.

Freedman’s Village, a camp of former slaves, was established by the federal government in 1863 on the grounds of the Custis and Lee estates, which later became Arlington National Cemetery, the Pentagon and the Navy Annex Building.