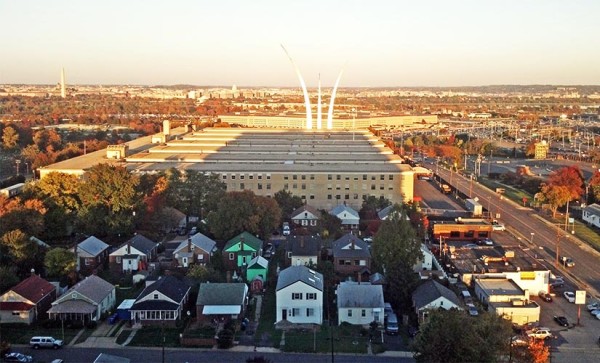 The long-awaited process of demolishing the Navy Annex and its surrounding parking lots is scheduled to begin within the next month or two, officials tell ARLnow.com.

The 1 million square foot military office complex, first built in 1941 and located on the eastern end of Columbia Pike, will be torn down to make way for an expansion of Arlington National Cemetery. The entire 42-acre Navy Annex site, which includes a large surface parking lot on the other side of Columbia Pike, will be turned into a grass field in advance of an official transfer from the Department of the Army to Arlington National Cemetery in late 2013. 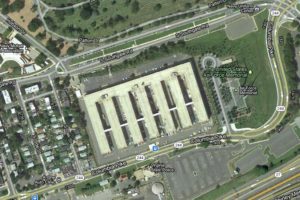 Demolition on the eastern wing of the Navy Annex is scheduled to start in November or December. The process will include abatement of asbestos and other hazardous materials. Demolition, site grading and seeding is expected to be complete by August 2013.

Columbia Pike should only experience “minimal” traffic impacts from the project; Southgate Road, which runs parallel to the Pike on the other side of the Navy Annex, is expected to see the majority of traffic disruptions.

The Navy Annex site is not expected to be used for burials for at least a couple of years. First, Arlington County and the federal government must come to a land swap agreement. The entities are still working on a deal to swap the county’s 4.23 acre Southgate Road right of way, and perhaps some other land, in exchange for a portion of the Navy Annex site.

The most recent land swap agreement — which has since fallen through, according to Arlington County federal liaison Brian Stout — called for construction of an Arlington County heritage museum on the site. At least a portion of the proposed museum would be used to commemorate the Civil War-era Freedman’s Village, which was once located on the site. 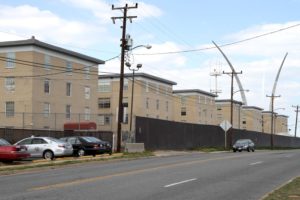 The county is also working with the federal government and VDOT to reach an agreement for a realignment of Columbia Pike. Currently, the Pike curves around the Air Force Memorial — located adjacent to the Navy Annex — and toward the cemetery before the intersection with S. Joyce Street.

Stout says the county is proposing that the Pike be straightened and run through the current Navy Annex parking lot, before making an L-shaped intersection with Joyce Street. That would make for an easier drive up the Pike and would make for a contiguous burial area that’s not divided by the busy road. The project has been discussed but so far no engineering plans are in place, Stout said.

Another point of discussion deals with parking for the Air Force Memorial. Stout said the current demolition plan seems to call for the demolition of a portion of the parking lot used by memorial visitors. If that’s removed, visitors may need to park on Southgate Road.

Takis Karantonis, Executive Director of the Columbia Pike Revitalization Organization, says the demolition presents an opportunity to improve the “eastern gateway” to the Pike. He said CPRO would like to see up to five stories of mixed use development along the Columbia Pike frontage of the tiny Foxcroft Heights neighborhood, located between the Navy Annex and the Sheraton National hotel.

“This is not the sightliest of places,” he said of the aging military building and the parking lots that line that section of the Pike. “Getting this redeveloped… is for us a welcome development. We think that the neighborhood will develop very nicely with that.”

Most of Foxcroft Heights is slated to remain single family homes under the recently-approved Columbia Pike Neighborhoods Area Plan.

A neighborhood information meeting about the demolition process is scheduled for 7:00 p.m. on Thursday, Nov. 15 at the Galaxy Room of the Sheraton National (900 S. Orme Street).