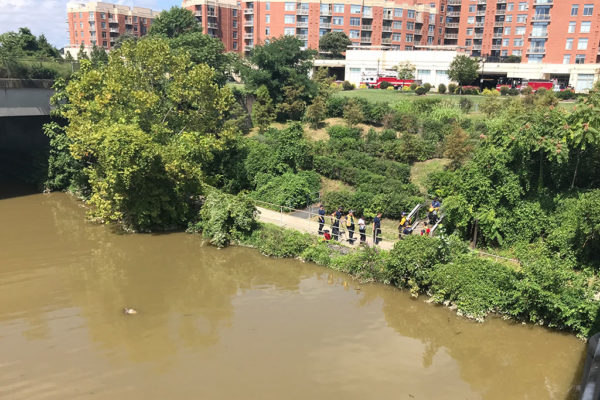 A body has been found in rain-swollen Four Mile Run near where it runs into the Potomac River.

First responders from Arlington, Alexandria and D.C. all responded to a report of a person in the water along the 3600 block of Potomac Avenue. The incident is currently being described as a recovery operation and investigation.

Units located one person in the water near the bridge on Potomac Ave. Units are operating in a recovery mode.

#DCsBravest Fireboat is having a busy day so far. Investigating a possible product in the water at @TheWharfDC and assisting @DCPoliceDept Harbor Division with an incident near 4 Mile Run. We are working with @DOEE_DC regarding the Wharf. pic.twitter.com/xLfbpNJipe

At appprox 12:24, public safety personnel responded to the report of an unknown item in the stream. A deceased adult male was recovered from the water. ACPD is conducting an active death investigation. There are no known threats to the community related to this investigation.