Before virtually every business’s opening and closing times became available via search engine, Michele and Mathias Hansen developed an app to help people find grocery store and coffee shop hours near them.

In order for nearly 5,000 stores to be displayed in that app, which launched in 2013, they needed to convert addresses to latitude and longitude coordinates.

“Whenever you see a map online… the addresses are always converted to latitude and longitude first,” Michele Hansen said. “A computer doesn’t really understand an address, but it understands coordinates.”

The services available to perform that conversion had several shortcomings, and the married couple knew there had to be a better way. So, they came up with it.

Geocodio, which launched in Jan. 2014, makes that address to coordinate conversion and goes beyond it, offering services like data appends that enable users to get congressional district and timezone information with their lookups.

“What we focus on is trying to make things as easy as possible,” Michele Hansen said. “No one sits around and collects latitude and longitude coordinates for the fun of it.”

With other services, if you needed to convert more than 2,500 addresses a day, you had to upgrade from free use to a $20,000 per year enterprise license, Michele Hansen recalls.

Looking up 5,000 addresses, the number the Hansens had needed for their app, costs $2 on Geocodio without add-ons.

And with other services, “you weren’t allowed to store that crucial information in your database so that you could show the map later,” Michele Hansen said. “Conversely, with our services, you can just get it once… and then you can store the database and never need it from us again.”

Geocodio’s clients “run the gamut,” and include academics studying elections, insurance companies looking to understand the risk of insuring a property and “the website that our daughter’s swim team uses to coordinate scheduling,” Michele Hansen said.

“We have 18,000 companies using the service, or thereabouts,” she added.

Geocodio works as a “foundational building block where we [are] sitting behind a curtain and providing the data that other apps need to shine, essentially,” Mathias Hansen said. “It’s crazy how many different use cases there are.” 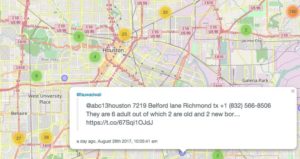 In one innovative application of their service, the Hansens created a map based on addresses individuals stranded during Hurricane Harvey posted to Twitter.

After they stayed up until 2 a.m. building the map, “I sent out an email to anyone on our customer list who had either a Red Cross email or had something to do with Texas,” Michele Hansen said.

Though “we can’t say for sure whether we helped anyone get rescued,” she said, “we did have a couple of organizations reach out to us asking to use it.”

Michele Hansen has worked on the company full-time since last fall, while Mathias works on it part-time. Geocodio has been funded via bootstrapping so far.

“We’re not opposed to [investment], it’s just that we have never needed it,” Michele Hansen said.

Going forward, Michele and Mathias Hansen plan to continue to listen to their customers and work to improve their service.

“From the beginning, we set out to solve those frustrations that we have, and so it’s very important to us to be affordable and easy to work with,” Michele Hansen said, “And not just stand over our customer’s shoulders and nitpick them about how they’re using our service and the data they’re getting back from it.”

END_OF_DOCUMENT_TOKEN_TO_BE_REPLACED

More Stories
Man Shot by Arlington Police Claims Officers Opened Fire as He Tried to SurrenderLegal Insider: Elon Musk’s Use of Marijuana Raises Question of Whether Clearance Rules Apply Equally to All