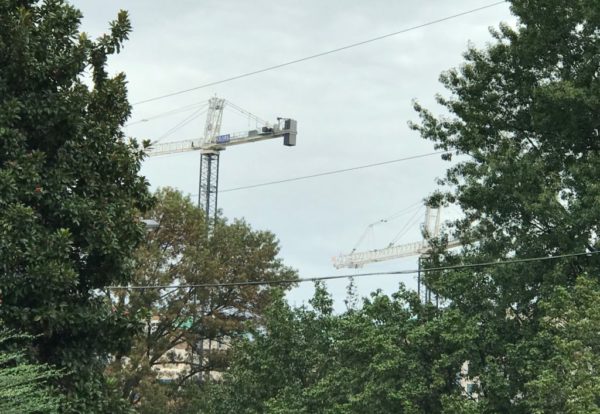 Arlington Police Involved in D.C. Standoff — County police are working with their counterparts in D.C. to arrest a man wanted on rape charges in Arlington. When they attempted to arrest him last night, he barricaded himself inside his home on the 3300 block of Mt. Pleasant Street N.W. [Twitter, PoPville]

ART Route Changes Start This Weekend — Riders on Arlington Transit’s 41, 42, 43 and 75 lines may notice some schedule adjustments starting Saturday. Service will become more frequent on all of the lines, and the northbound stop at the Courthouse Metro Station will become permanent. [Arlington Transit]

Arlington Planners Bring ‘Smart Growth’ Strategies to Md. — At a talk yesterday, the head of Arlington County’s planning division shared some wisdom on “Arlington’s smart growth journey” to planners in Prince George’s County, Md. “As a regional, national and international model of smart growth, Arlington, has demonstrated… how the mistakes and impacts of suburban sprawl can be corrected and avoided through a visionary and continuous commitment to innovative planning,” the event program noted. [Prince George’s County]

Valley Fest Road Closures This Weekend — S. Oakland Street will play host to the second annual Valley Fest, backed by New District Brewing and other local businesses and artists. There will be plenty of beer on tap, but police warn to watch out for some road closures. [Arlington Police]

Leaf Blowers Irk Arlingtonians — Some county residents raised a stink with the County Board over the pervasive drone of leaf blowers, now that fall is nearly here. But local officials say their hands are tied by state law and likely can’t pass any sort of ordinance to limit the noise. [Falls Church News-Press]

Head ‘Back to the Future’ with Rhodeside Grill — The Rosslyn-area restaurant is offering throwback cocktails and dishes from the 1950s and 1980s to commemorate the classic comedy. The event is set for Oct. 12. [Facebook]

Detours on Arlington-McLean Border This Week — Work to replace a culvert will result in the closure Valley Wood Road in McLean, running just near Williamsburg Middle School and Discovery Elementary School. [Tysons Reporter]

Firefighters Extinguish Bellevue Forest Blaze — County firefighters say an attic fan caught fire in a home on the 3100 block of N. Quincy Street around 6 p.m. last night. There were no injuries. [Twitter]