A Rosslyn-based security startup has pulled in $11 million in new funding.

LiveSafe announced the news last Wednesday (Sept. 26), noting that the new capital will help the company “further build out” some of its software offerings and expand its sales and marketing efforts.

The company was founded back in 2012 with a focus on campus security, in particular — co-founder Kristina Anderson is a survivor of the Virginia Tech shooting — but the startup has since expanded its scope to include a whole range of organizations looking to secure buildings or large events.

LiveSafe offers both a mobile app and a “command and communications” dashboard, in order to help businesses and universities alike collect information from employees or students about potential problems in the workplace. The company aims to protect the privacy of these reports, which can run the gamut from instances of sexual harassment to threats of violence from a coworker.

“Twenty-first century corporate leadership must treat safety, security, and incident prevention as a business priority,” Carolyn Parent, LiveSafe CEO, wrote in a statement. “The majority of costly, small- and large-scale risks that threaten organizations are known by some employees. It is critical that organizational leaders tap into their greatest sources of incident prevention intelligence — their people. Our mission is to enable companies to surface these risks via crowd-sourced intelligence to prevent any harm from occurring.” 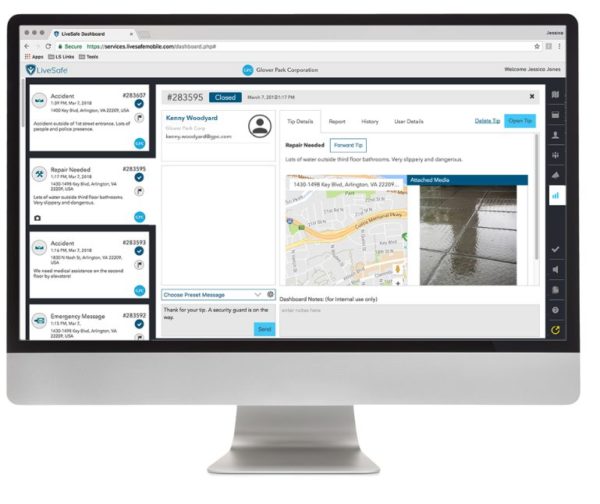 LiveSafe says it now boasts more than 300 customers across the country, up from around 50 just three years ago. Those clients include major firms like Hearst and Cox Communications, and even sports teams like the San Francisco 49ers.

The Crystal City-based Consumer Technology Association, a lobbying group for some of the nation’s largest tech firms, has also started working with LiveSafe to collect data ahead of its massive “CES” conference in Las Vegas.

“We use several strategies to focus on attendee safety and our relationship with LiveSafe provides an important additional layer to our security operation,” CTA President and CEO Gary Shapiro wrote in a statement. “The LiveSafe technology seamlessly connects our security professionals directly with the event’s hosts, guests, and vendors, enabling open and anonymous communication about potential incidents and concerns. This helps our safety and security experts to act preemptively, discovering incidents before they can develop into crises.”

LiveSafe got started in a co-working space for startups, but moved to an office on the ground floor of 1400 Key Blvd in 2013, where it remains based today.

The company says this latest round of funding was part of a “Series B-1 extension,” with roughly half of the new $11 million coming from new investors and the rest coming from firms which had previously chipped in for the company.

Two of LiveSafe’s co-founders, Shayan and Eman Pahlevani, have since founded another startup in Clarendon: Hungry.