(Updated at 6:55 p.m.) A Clarendon startup is aiming to bring healthy, chef-cooked meals to the masses.

Hungry, which has up until now been quiet about its plans, is preparing to formally launch this fall. The company — which has a sunny, open office in MakeOffices Clarendon, above Pacers — can be described as a sort of Uber-for-food. 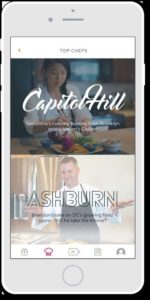 Hungry was founded by brothers Shayan and Eman Pahlevani, who previously co-founded Rosslyn-based LiveSafe. With LiveSafe on a solid path to success — a trio of billionaire backers, some $15 million raised, a growing list of clients — Shy and Eman decided to focus their entrepreneurial energies on a new challenge: what to do about lunch and dinner.

The idea came while Shy and Eman were still at LiveSafe. They were tired of the same old lunch options in Rosslyn, and then after a long day at the office they wanted better and healthier meal options for dinner. With a young daughter at home, Shy was particularly inspired. Cooking at home was time-consuming and ordering out often meant high-calorie meals from restaurants. Their idea: leverage the so-called sharing economy to let chefs make extra money on the side while consumers get better meals. 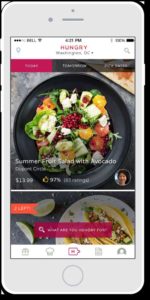 But Hungry’s appetite for innovation and growth doesn’t stop at individual dishes. The company hopes to be a full-blown food marketplace: its platform can be used by restaurants and chefs to order ingredients from artisan producers, by consumers to hire private chefs for special occasions at affordable prices, and by people or companies seeking food for events — from catered meals to wedding cakes.

(Last week, while ARLnow.com visited its offices, Hungry was preparing to provide food for a private event held by a buzzed-about, Clarendon-based startup media company.)

The company currently has 23 full-time employees, some 80 active chefs, $250,000 in startup capital and Chef Patrice Olivon serving as an advisor, Shy said. Its staff includes drivers — rather than outsource that task, Hungry plans to deliver its own meals, hiring one driver for every five active chefs on the platform.

Shy describes Hungry as a hyperlocal platform that’s focused on a “premium experience” — users can only order from Hungry-approved professional chefs that are within a 10-15 minute drive of the delivery destination, to keep the company’s promise of “authentic, one-of-a-kind fresh-cooked meals, delivered hot.” Users can specify which types of food they’re looking for along with dietary restrictions and preferences.

“Know your chef, know your food,” is another of the company’s credos.

Hungry plans to use content marketing to help attract customers. It’s been producing share-worthy videos, including the kind of short-form cooking videos made famous by BuzzFeed’s Tasty brand, with the hope of reaching consumers through their social media feeds. Targeted ads and email newsletters are also part of the plan, but that’s only half of the marketing battle — chef recruitment is equally important. 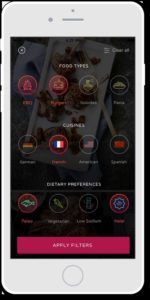 Much as Uber enabled anyone with a car and a clean record to earn money on the side — or as a full-time occupation — Hungry hopes to be a “business in a box” for qualified chefs, cutting out the middleman and allowing them to earn extra income outside of the restaurant or catering business. And Hungry hopes that those chefs will “be our voice,” helping to promote Hungry to their fans, friends and family.

The pitch for chefs is fairly simple. Line chefs make maybe $30,000-40,000 per year at restaurants — which doesn’t go far in a city like D.C. Hungry allows those chefs to earn cash on the side by offering meals through their platform. The chef gets about 70 percent of the purchase price, with most single-serving meals priced around $15. Of the first 30 chefs trying out the platform, some were making $1,000 in their first week on Hungry, Shy said.

To be considered for Hungry’s platform, chefs have to prove their professional credentials: several years of experience, culinary school training, a food handling and catering license and their commitment to follow Hungry’s code of conduct. Once a chef is approved, Hungry takes professional photos of their culinary creations, gets them set up on the platform and may even film a video for their profile on the Hungry app.

Shy says he and his brother decided to launch Hungry only in the D.C. area to start with because “we can be part of a movement here.” He said D.C. is becoming a food mecca yet is less saturated with food-related apps and startups than New York City or San Francisco.

“We can get great traction here,” he said. “This was one of Uber’s top markets because there are lots of smart, tech savvy people looking for convenience.”

“Arlington is a great place to be,” Shy said. “It’s very pro-business.”

Hungry is currently only available via an Apple iOS app, but a web-based ordering system is expected to be in place by the time the service officially launches — likely in October. In the meantime, Hungry will be introducing itself to locals this coming weekend, at a booth at Clarendon Day.

END_OF_DOCUMENT_TOKEN_TO_BE_REPLACED

More Stories
Arlington May Be Temporarily Without an Apple Store Just After the iPhone LaunchDeal of the Day: Half Off Tickets for Pups and Pilsners