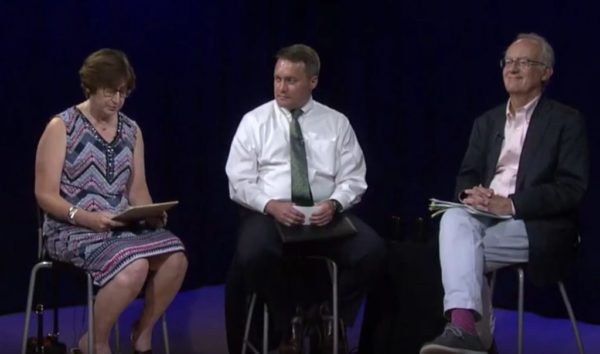 Even still, Vihstadt has persistently maintained a larger campaign war chest to draw on over the course of the race for the lone Board seat on the ballot this fall, with a roughly $73,300 advantage in cash on hand over de Ferranti through Sept. 30, according to campaign finance reports released Monday (Oct. 15).

De Ferranti, who is running to restore the Board to unified Democratic control after Vihstadt won a pair of upset victories back in 2014, managed to raise nearly $30,600 over the month of September, slightly less than the $39,600 he pulled in over the course of July and August. The independent wasn’t far behind, recording nearly $30,200 in contributions last month.

The bulk of the Democrat’s haul came courtesy of a $10,000 check from the Leaders in Education Fund, the political giving arm of the advocacy group Leadership for Educational Equity. The organization works to “end the injustice of educational inequity,” according to its website. Its board members and donors include former New York City mayor Michael Bloomberg and his daughter, Emma, and members of the Walton family, of Wal-Mart fame.

The incumbent’s real advantage is in his campaign war chest, where his more than $142,500 in the bank dwarfs the Democrat’s $69,200 in cash on hand. Yet de Ferranti will also benefit from the deep pockets of the Arlington County Democratic Committee, which reported having more than $104,000 in its coffers as of Sept. 30.

Vihstadt has now raised nearly $169,200 to support his re-election bid since January, compared to the nearly $137,000 the Democrat has managed over the same time period. The independent also out-raised Democrat Alan Howze when the pair squared off in back-to-back special and general elections in 2014, when Vihstadt became the first non-Democrat to sit on the Board since 1999.

In the county’s lone other race for local office, School Board member Barbara Kanninen reported raising a little over $2,000 last month, with about $17,000 in the bank. As the candidate running with the Democratic endorsement in the nominally nonpartisan race, she’s viewed as the heavy favorite over independent Audrey Clement, a perennial candidate for local office.

Clement reported receiving $3,700 in contributions last month, all but $100 of which came from Clement herself. She now has roughly $1,200 left in the bank.

Candidates will report on their finances again on Oct. 29, their last reports to be filed before the Nov. 6 election.