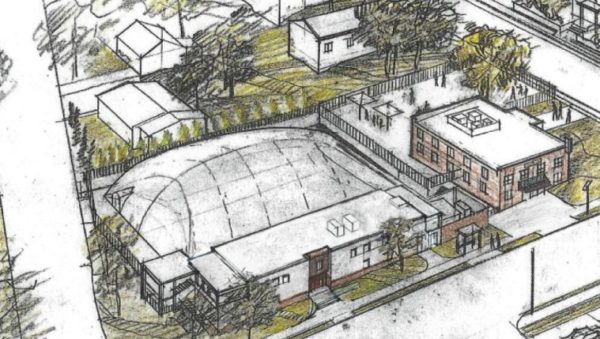 A Nauck church now has the green light to redevelop a former YMCA center into a new community pool, after Arlington officials signed off on a host of new zoning changes designed to make the construction of such pool projects a bit less onerous.

In back-to-back unanimous votes yesterday (Tuesday), the County Board approved the pool zoning tweaks, then used those new rules to give Macedonia Baptist Church the go-ahead to build the new pool at 3440 22nd Street S.

The site has been home to a pool and bathhouse since the 1960s, but the YMCA’s closure back in the mid-2000s left the building empty. Yet, when Macedonia sought to redevelop the site into a new “family life center,” the church ran into some zoning restrictions that could’ve made the whole project impossible to complete.

The Board was unwilling to completely re-write its zoning rules, but it would agree to make community pool projects (which are backed by nonprofit groups and not limited to a specific neighborhood) eligible for “use permits” in order to give the Board discretion to review the projects on a case-by-case basis, rather than subjecting every pool to the same standards.

That mean that the Board could sign off on Macedonia project under the newly approved zoning ordinance, even though it would’ve previously run afoul of rules requiring larger setbacks from the neighborhood’s streets. Board member John Vihstadt even dubbed the twin votes “a double win” for the community, and the county.

“We are demonstrating some nimbleness and alacrity in making a needed change that responds to new trends,” Vihstadt said. “This is so important, not just for the youth and individuals in the Nauck community… but also for entire Nauck neighborhood.”

The Macedonia project will include a seven-lane pool, a “seasonal dome” to allow year-round swimming and an auxiliary community center to sit alongside the existing Funshine Preschool. The church also anticipates allowing the Arlington Water Polo Club to use the facility for practice and training, though church representatives stressed that the pool will be open to anyone.

“Years ago, when the pool was there, it was beneficial to children and adults as well,” Macedonia congregant Laverne Langhorne told the Board. “We really do miss the pool.”

But beyond the importance of the Macedonia project on the micro level, Board members said they view the changes as an important step for the whole county.

The county currently has only five other community pools, and with zoning rules last revised in the 1950s, Board member Erik Gutshall said it was reasonable to assume that the old regulations meant “we really were never going to get another pool again.”

“This is the recognition by the Board that large parts of the county are no longer suburban,” Gutshall said. “We had a suburban style zoning ordinance… and while there are still parts of the county that are more suburban than others, what we’re doing now is untying our hands. We won’t just look at this with a suburban zoning code again.”