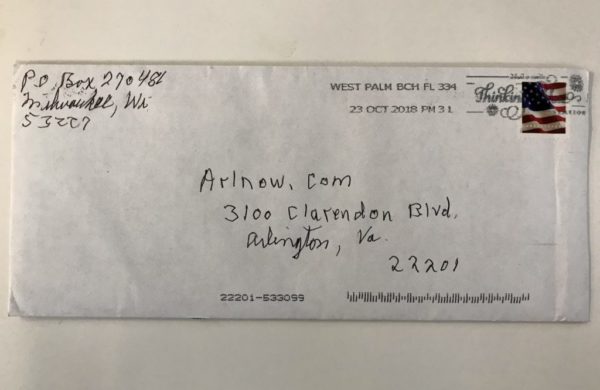 (Updated at 3:40 p.m.) At a time when the country is still reeling from the mass shooting at the Tree of Life synagogue in Pittsburgh, ARLnow received another reminder that the kind of ideology that inspired the shooter is still very much active in the U.S. and a part of Arlington’s history.

The neo-Nazi group New Order, which formed in Arlington but is now based in Milwaukee, hand-addressed a mailing containing various flyers and Swastika-adorned propaganda to ARLnow.com’s former Clarendon office.

The mailing was sent from Florida prior to this past weekend’s mass shooting, according to the postmark. There was no explanation for why it was sent; Arlington Sun Gazette editor Scott McCaffrey said no such mailing had been sent to the newspaper.

Among the flyers in the mailing was one advertising the “Lincoln Rockwell Centennial Anniversary.” Rockwell was born in March 1918 and assassinated at the Dominion Hills Shopping Center in Arlington on Aug. 25, 1967.