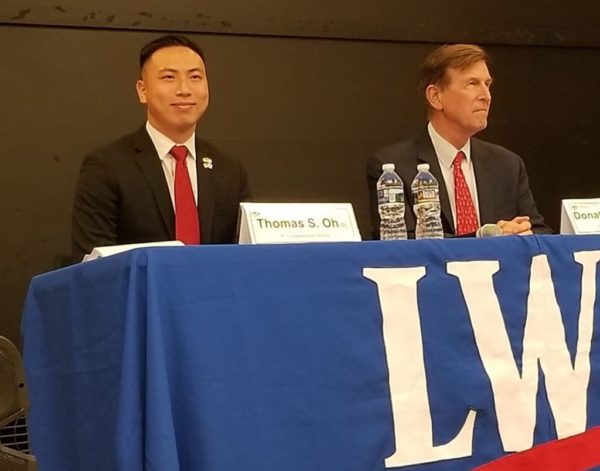 Read through Thomas Oh’s campaign platform too quickly, and you might come away with the impression he’s a Democrat.

Consider that he supports efforts to combat climate change, he backs some gun control measures and he’s refused to accept any money from Virginia’s electric utility companies or from political action committees, a series of positions favored by most on the left in this day and age.

But Oh, of course, is the Republican nominee hoping to unseat Democratic Rep. Don Beyer this year in the 8th District, which includes Arlington and parts of Alexandria.

Oh faces the longest of long odds, considering that the district last elected a Republican back in 1988 and voters have twice sent Beyer to Congress with margins of victory larger than 30 percent. With good reason, Beyer, once Virginia’s lieutenant governor and the owner of several local car dealerships, is widely seen as one of the safest members of Congress in the entire country.

Regardless of his chances, however, Oh’s candidacy presents an interesting question for Republicans around the state, and around the country. In an increasingly conservative GOP, led by a combative president, is there room for a moderate Republican like Oh?

“You can pet the base and make them like you, just keep saying you’re pro-life, you love the Second Amendment and the base will love you,” Oh told ARLnow. “Or you can try your best to win it and piss a lot of your base off by trying to be in the middle of the road… but someone needs to do it, otherwise we’ll continue going down this road we’re on.”

Oh is hoping that embracing some positions running against the party platform will win him votes from independents, Republicans and even some Democrats looking for a change. But he notes that his views have frustrated plenty of hard-core Republicans, and he hasn’t exactly attracted an outpouring of support from traditional GOP groups and donors — the National Rifle Association’s political arm has refused to endorse him, and Oh says he hasn’t had much in the way of support from either the state Republican party or the National Republican Campaign Committee.

It doesn’t help matters either that Oh is on the ticket with Corey Stewart, the party’s nominee against Sen. Tim Kaine (D-Va.), who has attracted scorn from all corners for his tirades against undocumented immigrants and his embrace of Confederate symbols and white nationalists.

It all adds up to an unusual fit for Oh, as he tries to present a moderate, more libertarian vision in the deep blue district, while the rest of the party moves sharply in the other direction.

“He may not be likely to win a statewide Republican primary, but it’s been a while since Republicans have won a statewide election,” said Stephen Farnsworth, a professor of political science at the University of Mary Washington in Fredericksburg. “Presenting the party as an aggressive, conservative voice isn’t leading to success… so it does seem the Republican party is going to have to do some redefining to be competitive, and this candidate may be the shape of things to come.”

Oh says he decided to run for office in the first place because he wanted to “do something, rather than just complain about our problems.” He grew up in Northern Virginia, graduated from Centreville High School and joined the Army right out of school. He earned his degree from George Mason University, and ultimately moved back to the area as a federal contractor.

Most of Oh’s positions are familiar ones among traditional Northern Virginia Republicans. He worries the federal deficit is too high, he wants to cut taxes and address Metro’s rising costs by confronting expenses generated by its labor union.

His arguments are also mirror those made by most long-shot challengers to entrenched incumbents — he claims that Beyer “takes the seat for granted” and has been unresponsive to constituent concerns, particularly those of veterans. In a statement, Beyer forcefully pushed back against the latter notion, calling it “absurd” and noting his office has taken on more than 400 veterans’ cases during his time in Congress.

Where Oh diverges a bit more from Republican orthodoxy is on guns — he supports modest gun safety measures and, like Beyer, has earned a “gun sense candidate” distinction from the advocacy group Moms Demand Action — and the environment.

He not only supports investments in renewable energy, but he’s refused to accept any money from Dominion Energy and Appalachian Power, the state-regulated electric monopolies who have long been the state’s most generous political contributors. The group “Activate Virginia” began asking candidates to swear off such contributions last year in order to encourage politicians to be more skeptical of their interests, and Executive Director Josh Stanfield says Oh is the only Republican to have taken his group’s pledge.

“Dominion has been buying Democrats and Republicans for years,” Oh said. “My opponent talks about climate change all the time, but you can’t take money from Dominion Energy.”

Records show that Dominion’s PAC has given Beyer $16,500 over the course of his three campaigns, and Stanfield notes that his request that Beyer sign the anti-fossil fuel money pledge was “apparently not worthy of a response.”

But Beyer points out that Oh is taking an unusual tack by impugning his credentials on the environment. Beyer has been especially vocal on climate change, even introducing carbon tax legislation, and he was a leading voice in calling for the resignation of former Environmental Protection Agency Administrator Scott Pruitt.

“If the assumption is that financial support from utility companies (many of which have significant clean energy portfolios, by the way) means that I’ve been bought, well, those companies aren’t getting very much for their money,” Beyer wrote.

But Oh sees Beyer’s decision to accept that cash as hypocritical, and he believes people appreciate his stance as a “political outsider” willing to take a strong stance on such issues.

It’s certainly put him at odds with Stewart, who is also skeptical of Dominion contributions, but disagrees with Oh on just about every issue. Oh says he doesn’t worry too much about that split, noting that he’s “running my own campaign, more towards my own philosophy.” The Arlington County Republican Committee has also campaigned for both Oh and Stewart, despite their differences.

But has the state GOP and the NRCC, the chief fundraising arm of the party’s congressional leadership, come in to help him out? As Oh puts it, “not so much.”

For his part, Virginia Republican Party Spokesman John March insists that the GOP “is a big-tent party and we make room for everyone who supports limited government and lower taxes,” and he pushes back on any implication that the party has been anything less than fully supportive of Oh.

Yet Oh’s campaign finance reports make it clear that he hasn’t exactly benefited financially from institutional support — outside of a $5,500 donation from the 8th District Republican Committee, Oh hasn’t gotten much in the way of cash from Republican groups to power his campaign. Oh himself has lent the campaign $5,000, and only reported taking in about $56,000 in contributions. Beyer, by contrast, has raised more than $1.9 million to support his re-election bid.

Perhaps unsurprisingly, Farnsworth doesn’t see much chance of success for Oh. He points out that Oh would need some sort of major scandal involving Beyer to have a chance — none have been forthcoming — or a “generous national environment.” However, Farnsworth notes that Donald Trump has “generated extraordinary hostility in the suburbs,” making Oh’s task ever more difficult, regardless of his moderation.

“But sometimes what elections can do is get you noticed,” Farnsworth said. “You run for state legislature, get a job in an administration, move to a more favorable district. Any of these things might happen.”

Oh wouldn’t say whether where his ambitions might lie should he lose on Nov. 6, saying he’s learned to “focus on what’s in front of you.” Considering his reluctance to toe the party line, however, he stresses that he’s not taking on this quixotic bid for his own selfish reasons.

“I don’t have an ulterior motive, I’m just here to do it,” Oh said. “I just want to do something to help the community.”