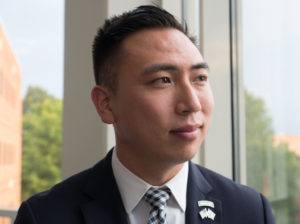 Last week, we asked the two candidates for Virginia’s 8th District in Congress, covering Arlington and Alexandria, to write a sub-750 word essay on why the county’s residents should vote for them on Nov. 6.

Here is the unedited response from Republican Thomas Oh:

My name is Thomas Oh, and I am running for US Congress in our 8th Congressional District. I’m an Army Airborne Ranger, hardworking Korean- American, and public servant who would like to continue my service to the people by serving you. I’m a better alternative than my opponent for the following reasons:

I’m serious about having term limits. I don’t care what political parties, corporations, or lobbyists want. I just need 6 years to make some real positive changes for our District, and I will act upon my words.

Politicians shouldn’t be bought, especially when most politicians are already among the 1%. As a working- class member, I want to give the government back to individual citizens and serve the people. The concept is simple, DEMOCRACY IS NOT FOR SALE!

My family immigrated to the United States to seek opportunity, liberty, and freedom. I want to make sure that the American Dream is a dream that works for everyone.

I served 8 years in the Army, and I understand the ultimate sacrifices made by our heroes. My campaign hosted a charity forum for local veterans and donated all proceeds to VFW Post 3150 in Arlington. My opponent refused to attend the forum while Congress was in recess, voted against the Veterans Affairs Accountability & Whistleblower Protection Act, and even continuously votes against the VA Accountability Acts.

I support the Disability Integration Act, alongside ADAPT DC and Coalition for Community Integration. It is a bi-partisan effort that my opponent has ignored 10 times when they reached out to him. I support organizations benefiting the disability community, such as Service Source, and enjoyed my time meeting everyone at their annual picnic when my opponent did not attend.

Everyone should be treated equally, no matter who they choose to love. I marched alongside the Capital Pride Parade, and I also attended the annual Arlington Gay & Lesbian Alliance Annual Ice Cream Social. My opponent did not participate in either events.

As a 26 year-old millennial, I truly care about our future. My biggest concern is the $21 trillion dollar debt that my opponent has done nothing about, over his past 4 years in office. He even voted against the Spending Cuts to Expired and Unnecessary Programs Act.

5)     I will always put people before politics

I have proven my ability to put politics aside and work across party lines. I am a proud ally of Activate Virginia which was an all Democrat and Green Party organization, until I was the first Republican to join. I do this because I listen to your concerns and want to represent you. My opponent speaks about climate change, yet continues to take over $20,000 from Dominion Energy and not join Activate Virginia.

If you are an elected official, it means that you have a commitment to serve. I have personally knocked on over 3,500 doors during my campaign. I would like to ask; how many doors has my opponent knocked on? I take running for office as a serious commitment to the people of this district, and that is why I will never miss an opportunity to address your concerns in order to see how I can be your servant. I attended all 11 out of 11 forums scheduled for my opponent and I, while he attended 5 out of 11.

I kindly ask for your vote on November 6. If you would like to learn more or donate to support my campaign, please visit my website at: www.letschangecongress.org.

Campaigning would not be possible if it were not for individual supporters like you! Thank you so much to everyone who have believed in me, and for giving me this opportunity to fight for a better 8th District.