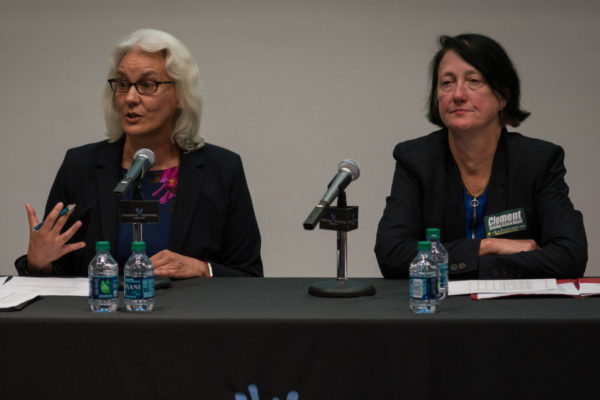 Opponents of the Arlington School Board’s decision to change the name of Washington-Lee High School have now poured thousands of dollars into Audrey Clement’s independent bid to unseat incumbent Board member Barbara Kanninen, providing the perennial candidate with her largest fundraising haul across any of her eight bids for local office.

Clement managed to raise just over $13,300 over the month of October alone, according to campaign finance documents, far outpacing Kanninen’s $4,200 raised over the same time period. Of that amount, nearly $10,200 came from two outspoken opponents of the Board’s vote in June to strip Confederate general Robert E. Lee’s name from the school.

Most of the rest of her fundraising haul for the month — just over $1,700 — came courtesy of Clement herself. She’s provided the bulk of the cash to support her second bid for the School Board, chipping in about $11,300 of the $28,200 she’s raised since January.

But the late monetary support has provided Clement, a member of the county’s Transportation Commission and a programmer for a Reston-based software company, with the most cash to power any of her long-shot campaigns since she first started running for various county offices in 2011. She’s never garnered more than 33 percent of the vote in any of her various races, often losing to county Democrats — Kanninen has the local party’s backing in the nominally nonpartisan School Board race, just as she did when first won office in 2014.

The contributions appear to be headed Clement’s way because she’s made preserving W-L’s name a prime focus of her campaign. She’s accused the Board of pushing through the name change while ignoring more substantive issues within the school system, targeting Kanninen for criticism specifically. Kanninen served as chair of the Board last year, a post that rotates among the five members, when the Board ultimately voted to change the school system’s policies for school names, then kicked off a renaming process for W-L, specifically.

While the Board has consistently acted unanimously when it comes to the renaming decisions, opponents of the change have zeroed in on Kanninen in recent weeks, calling her the prime architect of the initiative. Ed and John Hummer, a pair of W-L basketball stars in the mid-1960s, even purchased a full-page ad in the Sun-Gazette this week to promote Clement’s candidacy and blast Kanninen as “the person responsible for the whole ill-conceived name change project.”

John Hummer, who attended Princeton and became a first-round draft pick in the National Basketball Association after graduating W-L, provided Clement with nearly $5,200 in cash over the course of the last month. Donald Morey, another name-change opponent and frequent author of critical letters to the editor on the subject, added another $5,000.

Clement seems to have spent that cash just as quickly as she pulled it in — finance reports show that she spent nearly $13,000 last month, with the bulk of that paying for ads in the Washington Post and the Sun-Gazette.

She only reported having about $1,600 in the bank for the campaign’s closing days, compared to Kanninen’s war chest of nearly $19,200.