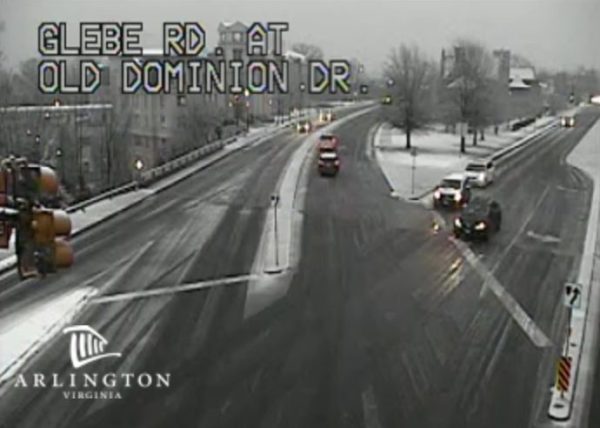 Arlington County will be under a Winter Weather Advisory Thursday as a mix of snow, sleet, rain and freezing rain fall, causing a potentially slippery morning commute.

The National Weather Service says residents should “be very careful if you venture outside tomorrow.”

…WINTER WEATHER ADVISORY IN EFFECT FROM 4 AM TO 1 PM EST THURSDAY… * WHAT…MIXED PRECIPITATION EXPECTED. TOTAL SLEET AND SNOW ACCUMULATION OF UP TO ONE INCH, AND ICE GLAZE ACCUMULATIONS OF UP TO A TENTH OF AN INCH EXPECTED. * WHERE…PORTIONS OF THE DISTRICT OF COLUMBIA, CENTRAL MARYLAND AND NORTHERN AND NORTHWEST VIRGINIA. * WHEN…FROM 4 AM TO 1 PM EST THURSDAY. * ADDITIONAL DETAILS…PLAN ON SLIPPERY ROAD AND SIDEWALK CONDITIONS IN SOME AREAS. THE HAZARDOUS CONDITIONS COULD IMPACT THE MORNING COMMUTE. PRECAUTIONARY/PREPAREDNESS ACTIONS… BE VERY CAREFUL IF YOU VENTURE OUTSIDE TOMORROW. WATCH YOUR FIRST FEW STEPS IN PARTICULAR AS YOUR STEP OR PATH MAY BE COATED WITH ICE. A WINTER WEATHER ADVISORY MEANS THAT PERIODS OF SNOW, SLEET OR FREEZING RAIN WILL CAUSE TRAVEL DIFFICULTIES. EXPECT SLIPPERY ROADS AND LIMITED VISIBILITIES, AND USE CAUTION WHILE DRIVING. THE LATEST ROAD CONDITIONS FOR THE STATE YOU ARE CALLING FROM CAN BE OBTAINED BY CALLING 5 1 1. &&

Brace yourselves. We are likely in for a slippery commute tomorrow morning. People in the Washington, D.C. metro area will be waking up to a wintry mix Thursday morning, the National Weather Service and area meteorologists are forecasting. The forecast calls for a mix of “sleet, snow, and rain, and freezing rain.” Motorists and commuters should be especially careful on their morning commute and throughout the day, AAA Mid-Atlantic is urging, as the precipitation is expected to continue, either changing to rain or snow in the region.

Winter doesn’t officially arrive until the “Winter Solstice,” which falls on Friday, December 21, 2018. Although the Washington metro averages a blizzard “once every four to six years,” the District has an annual snowfall average of 15.5 inches, and we had snow in the forecast on the first day of Spring this year. Yet when it comes to rainfall, the city experiences an average of 115 days per year with precipitation. A “wintry mix” of precipitation can cause a big mess and pose special problems for area commuters.

“Thursday morning’s predicted wintry mix of precipitation will make for slippery conditions on roadways in our region,” said John B. Townsend II, Public and Government Affairs Manager for AAA Mid-Atlantic. “Roads that are slick or ice-covered can create a worst-case scenario for commuters. The first rule of safe driving during wet weather is to slow down to improve tire traction. Plus, given the darker morning and evening commutes, be especially cautious and look out for pedestrians.”

Hazardous storms and inclement weather are a factor in more than half a million crashes and more than 2,000 road deaths every winter, according to research from the AAA Foundation for Traffic Safety. Given the weather forecast, AAA Mid-Atlantic is encouraging drivers to be prepared and offers the below tips:

Avoid braking and turning at the same time. Brake first, then turn, then accelerate. Accelerate and decelerate more slowly than you would on dry roads.

END_OF_DOCUMENT_TOKEN_TO_BE_REPLACED

More Stories
With Amazon On the Way, You Can Help Fund More Local Journalism in ArlingtonAmazon’s Arrival Brings Plans for Transportation Transformation Around New Headquarters