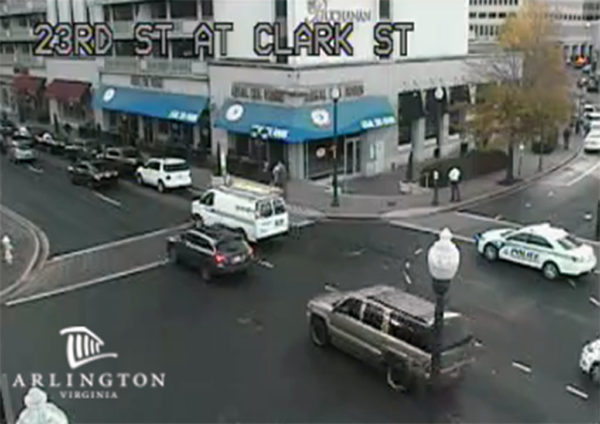 (Updated at 11:30 a.m.) A portion of S. Clark Street in Crystal City remains closed by police due to a bomb threat.

Clark Street is currently closed between 23rd Street and 26th Street while Pentagon and Arlington County bomb squads investigate a reported threat at a Department of Defense facility. Bomb-sniffing dogs are searching the building to ensure there are no explosives inside.

Pedestrians were moved away from the area as a precaution.

“Avoid the area and follow police direction,” said an Arlington Alert about the incident.

Update at 11:35 a.m. — The “all-clear” has been given and first responders are preparing to leave the scene.

UPDATE: The all clear has been given to the earlier bomb threat in Crystal City. Employees are beginning to renter buildings and road closures should be lifting shortly. https://t.co/hpdwk7vlCu

The ALL-CLEAR has been given. Roadways around the affected area will reopen approx. 20 mins. Due to safety reasons, employees are asked to follow police direction before re-occupy the building(s).