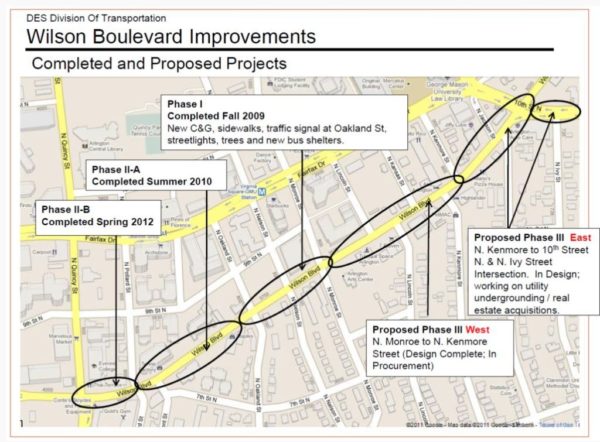 The county could soon get started on some eagerly awaited improvements to Wilson Blvd in Virginia Square this spring.

The second phase was divided into two different areas, with the first one finished in 2010 and the second one in 2012.

Now, last part of the project has been split into “east” and “west” phases along N. Kenmore Street.

The County Board is now set to award Sagres Construction Corp. a contract and $1,084,766 for the work needed for the “west” portion between N. Monroe Street and N. Kenmore Street. Construction could then begin next spring and then wrap the following summer.

Project elements for both “east” and “west” include new curbs and gutters, ADA-compliant sidewalks, traffic signal improvements, Carlyle-style streetlights and trees along the street. Upgrades to the storm sewers and new asphalt paving, signing and markings will also happen, according to the county.

“During the conceptual design process, residents especially noted concern for providing a safe pedestrian crossing at the N. Kenmore Street intersection,” according to county documents.

The Board is set to approve the contract at its meeting Saturday (Dec. 15) as part of its consent agenda, which is generally reserved for noncontroversial items.

More Stories
Construction on Ballston Quarter Pedestrian Bridge Ramps Up Ahead of Spring 2019 OpeningUPDATED: Police Drag Man Out of Home After Alleged Drunken Conduct Around Child