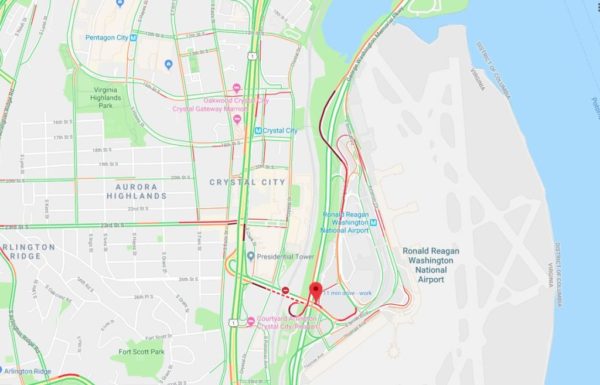 It’s one of the busiest travel days of the year and a big crash is making it worse for those heading to or from Reagan National Airport.

The crash involved a vehicle that hopped the guardrail along a bridge that connects the airport and Route 1, coming to rest with its rear wheels in the air and smoke coming from its engine compartment. The access road — known as Route 233 — was blocked for a period of time by the police and fire department response, leaving the GW Parkway as the only way to access the airport.

As of 2:30 p.m., at least one eastbound lane had reopened. A traffic map shows heavy traffic on both the Route 233 airport access road and the access road leading from the southbound GW Parkway, with slow extending onto the parkway itself.

Picture from the scene pic.twitter.com/FF5lBDK0ew

Tow truck is on scene at Route 233 airport entrance road. Traffic into the airport is moving slowly past the scene. Fastest airport access is from GW Parkway.