It was only a year ago that esteemed homebrewers Scott Janish and Mike Tonsmeire signed a lease on a building in Columbia, Md. That space now holds the production brewery and tap room for one of the hottest breweries in our area, Sapwood Cellars.

Mike is the author of “American Sour Beers”, a widely respected book on mixed fermentation beers. He also was an original recipe writer and flavor developer for Modern Times Beer in San Diego, Ca.

Together they have immersed themselves into a philosophy of making world-class beers through the understanding of processes, techniques and ingredients. Rarely is this seen in the brewing industry, and almost never in a brewery in its infancy.

Open now for less than 6 months, the general consensus seems to be (and we agree) that their beer is of the highest quality. They are definitely living up to, if not exceeding their pre-opening hype. 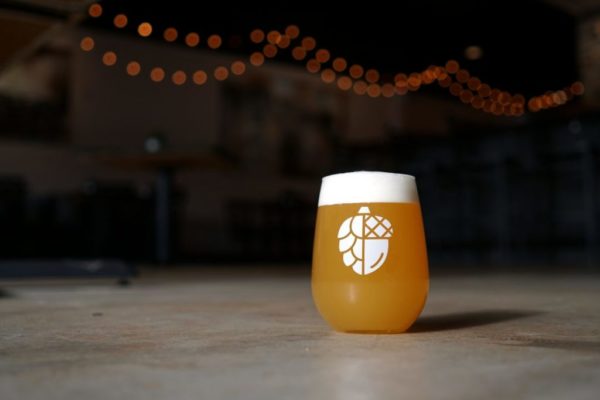 I would call these guys beer scientists. It’s one thing to throw a ton of various hops into a hazy IPA, jack up the ABV to mask flaws, put out a super hoppy hazy beer and watch it fly out the door. We find that way too often. But what sets the best of the best apart from the rest? I believe (although I am no brewer) that it all comes from a complex understanding of process and ingredients, paired with the knowledge of how those two key aspects work together.

This understanding is what can create truly wonderful beer. That work was on display when Sapwood released a Double IPA named ‘Snip Snap’. A wonderful beer, clocking in at 7.9% ABV, hopped generously with Citra and Galaxy hops.

We had our first taste during the Montgomery County, Md introduction event of Sapwood at our sister store Downtown Crown Wine and Beer in Gaithersburg, Md. That weekend ‘Snip Snap’ became the beer of choice amongst our customers and with those visiting the brewery.

Word spread in a viral fashion on all of the local beer forums, and in the coming days, the hype and demand for Sapwood just seemed to grow and grow!

One exciting thing to look forward to is all of the beer they currently have aging in a variety of barrels. With Mike’s knowledge of mixed fermentation (wild yeast, bacteria and microflora), the future looks bright for those that enjoy complex, barrel-aged wild ales. They are also aging a variety of non-wild ales in various spirt and wine barrels.

If you are interested in trying the work of Sapwood Cellars, head over the bridge to their brewery in Columbia, Md. Kegs rarely leave the brewery, but this weekend they’re introducing ‘Concentric Rings’ (a brand new 8.1% all Citra hopped Double IPA) and ‘Threat Level Pistachio’ (a variant of their 7.4% ABV Stout with the addition of dry roasted pistachios).

A second batch of ‘Snip Snap’ is on the horizon for those that missed out the first time around.

Cheers to Sapwood, a great addition to the local brewing scene within the DMV! Learn more about Sapwood Cellars and the guys behind the brewery here:

Sapwood is located off of Route 108 in Columbia, Maryland. Right up Route 29 or I-95. Easy Drive from Arlington, D.C. or the rest of Virginia.