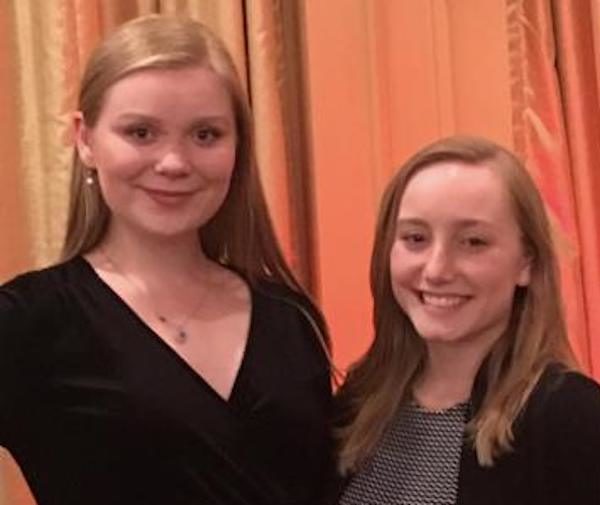 A group of Arlington high school seniors are now working to raise $50,000 to support blood cancer patients, in a bid to honor a friend who died from a rare form of leukemia a few years ago.

In all, nine students at the newly renamed Washington-Liberty High School are participating in the “Students of the Year” fundraising campaign run by the Leukemia and Lymphoma Society. The girls are competing with other students across the region to see who can raise the most money to support the nonprofit’s mission, and the program includes leadership and professional development opportunities as well.

The students named their team after Juliana Clarkson, a 14-year-old student at Swanson Middle School who passed away due to complications from mixed-phenotype acute leukemia. Two of her best friends, Julia Elman and Grace Barnes, say they were inspired to start a “Cancer Education and Action Club” at W-L as freshmen in her memory, and they’re now leading the “Students of the Year” effort as well.

“This spring, Julia and Grace will be graduating… a momentous milestone that would have included Juliana,” the students wrote as part of their fundraising efforts. “Team Juliana fights to give child cancer patients the possibility to grow up and follow their dreams, something Juliana will never get to do.”

Elman and Barnes also helped organize fundraisers through the Leukemia and Lymphoma Society’s “Light the Night Walks,” raising “tens of thousands of dollars for LLS while providing an avenue for friends and family to come together and honor Juliana each year,” they wrote.

Elman added that she’s also working to honor her grandmother, who passed away from chronic lymphocytic leukemia years ago. Elman’s mother, Janet, says her daughter is planning to attend Princeton University this fall — she added that Julia was also recently diagnosed with primary lymphedema, a disease affecting the lymphatic system which is treatable, but has no known cure.

The students have until March 2 to raise money for the cause. The Shirlington restaurant Palette 22 is holding a fundraiser to support the group on Monday (Jan. 28), and full details about how to contribute are available online.