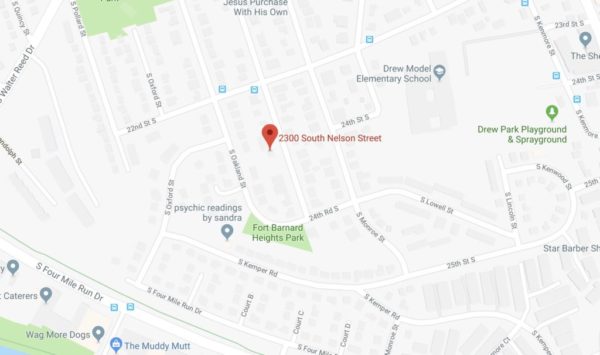 (Updated at 3:05 p.m.) Arlington County Police are investigating a shooting in the Nauck neighborhood.

The shooting happened around 9 p.m. on the 2200 block of S. Oxford Street and involved a suspect and a victim that knew each other, according to police. One person suffered non-life-threatening injuries and was taken to a local hospital via ambulance.

A neighbor told ARLnow that there was a “heavy police presence and crime scene tape” near where the shooting happened.

Based on the preliminary investigation, this incident appears to involve known individuals. This remains an active investigation and there is no known threat to the community.

ACPD released additional information about the shooting Wednesday afternoon, saying three people were involved in a physical altercation and one was shot, though so far no arrests have been made.

The Arlington County Police Department’s Homicide/Robbery Unit is investigating a shooting that took place in the Nauck neighborhood on the evening of January 29, 2019.

At approximately 9:05 p.m. on January 29, police were dispatched to the 2200 block of S. Oxford Street for the report of shots heard. Upon arrival, officers located three male subjects involved in a physical altercation. The subjects were separated by police and it was determined that one was suffering from a gunshot wound. He was transported to an area hospital with non-life threatening injuries. The other two subjects did not require medical treatment.

This incident remains an active criminal investigation and police continue to work to determine what preceded the altercation. All parties involved have been identified and no charges have been sought at this time. Based on the preliminary investigation, there appears to be no ongoing threat to the community.

Anyone with information related to this investigation is asked to contact Detective R. Ortiz of the Arlington County Police Department’s Homicide/Robbery Unit at 703-228-7402 or [email protected] Information may also be provided anonymously through the Arlington County Crime Solvers hotline at 1-866-411-TIPS (8477).