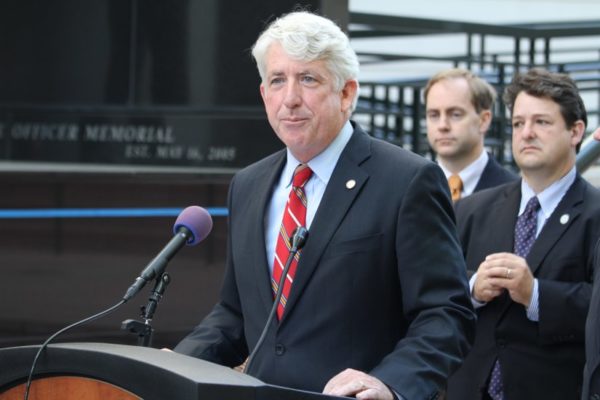 Democrats across Virginia have been shocked by yet another scandal today (Wednesday), after Attorney General Mark Herring admitted that he also once donned blackface at a college party.

Herring called a sudden gathering with the General Assembly’s Legislative Black Caucus this morning to deliver the news, then released a statement to that effect shortly afterward. Herring said he dressed up in a wig “and brown makeup” in order to imitate a rap artist when he was in college, explaining it was due to a “callous and inexcusable lack of awareness and insensitivity to the pain my behavior could inflict on others.”

“It was really a minimization of both people of color, and a minimization of a horrific history I knew well even then,” Herring wrote. “That I have contributed to the pain Virginians have felt this week is the greatest shame I have ever felt.”

His admission comes as politicians of both parties continue to press Gov. Ralph Northam to resign for similar reasons, after the discovery that a racist photo appeared on the governor’s medical school yearbook page and Northam’s subsequent admission that he once wore blackface rocked the state capitol. The man in line to replace Northam should he step down, Lt. Gov. Justin Fairfax, has become mired in scandal as well since then, as a woman has come forward to accuse Fairfax of sexually assaulting her in 2004.

The attorney general’s disclosure leaves the state’s top three elected officials in limbo — should all three resign, Republican House Speaker Kirk Cox would be in line to become governor.

Herring said in his statement that he would have “honest conversations and discussions” about whether he’d seek to stay in office, as both Northam and Fairfax have so far sought to do. Herring joined virtually all of the state’s Democrats in calling on Northam to resign soon after the discovery of his yearbook page, but other Democrats have yet to demand that the state’s top lawyer step down with the same speed that they called for Northam’s job.

Democratic Sens. Mark Warner and Tim Kaine expressed shock and surprise at the revelation when reporters questioned them about it this afternoon.

SEN. WARNER reacts to the news coming out of Virginia, saying he’s “shocked and disappointed” by what he’s heard thus far about the Attorney General.

“This has been an awful week for Virginia,” he said for the first time on camera since the Gov. Northam news broke last week. pic.twitter.com/ruucjbGTHx

.@timkaine on Herring: "I am shocked and saddened to learn of this incident. This revelation throws salt in a wound opened wide in recent days."

Other state lawmakers have yet to comment on Herring’s admission, including Arlington’s delegation or local Democratic committee.

The news could also torpedo Herring’s nascent campaign for governor — he’d already announced plans to run for the top spot in Virginia politics in 2021, and earned the early endorsement of local Del. Patrick Hope (D-47th District) a few weeks ago. Hope did not immediately respond to a request for comment on Herring’s admission.