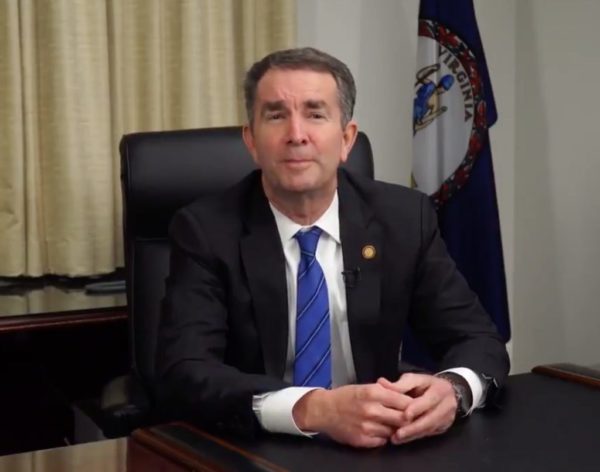 Gov. Ralph Northam continues to resist an overwhelming chorus of voices calling on him to resign his post today (Monday), including virtually all of Arlington’s Democratic leadership.

Northam, a Democrat, has experienced a dizzying reversal in his political fortunes since revelations late Friday that a photo of one man wearing a KKK uniform and another wearing blackface appeared on his medical school yearbook page.

The governor initially released a statement acknowledging he was indeed pictured in that photograph, leading to near-unanimous calls for his resignation Friday night. But in a hastily convened press conference Saturday afternoon, Northam reversed himself, claiming he is now confident he is not pictured in the racist photograph and that it was placed on his yearbook page by mistake.

However, Northam did confess to once donning blackface as part of a dance competition in 1984 while impersonating Michael Jackson. That admission, combined with his sudden reversal, only served to intensify pressure from party leaders that Northam must give way to his lieutenant governor, Justin Fairfax.

Rep. Don Beyer (D-8th District) was one of the few elected officials to stop short of demanding Northam’s resignation ahead of the press conference. But Arlington’s lone congressman released a statement immediately after the governor’s comments saying he’d expected Northam to resign Saturday, and instead wants him to go.

“Virginia has a painful past where racism was too often not called out for its evil. The only way to overcome that history is to speak and act with absolute moral clarity,” Beyer wrote in a joint statement with Rep. Gerry Connolly (D-11th District). “It is for that reason that the governor must step aside and allow the process of healing to begin under the leadership of Lt. Gov. Justin Fairfax.”

County Board Chair Christian Dorsey added that Northam’s explanations at the press conference “strain credulity” and urged him to step down as well.

“Even after giving him the benefit of many doubts, I was struck by his inability to accept responsibility and articulate any concrete steps to promote healing in our state,” Dorsey wrote in a statement. “Someone who has grown as Mr. Northam professes would have recognized that he has lost the confidence of so many Virginians along with his most ardent supporters… And Democrats and progressives, please don’t think that a Northam resignation cures what ails us. Our work to build systems that recognize the dignity, value and importance of all persons remains unfulfilled.”

Del. Mark Levine (D-45th District) wrote in a newsletter to constituents that he doesn’t believe Northam to be a racist, but that the governor’s changing stories undermined his confidence in Northam’s leadership going forward. State Sen. Barbara Favola (D-31st District) expressed similar concerns, saying that an “important bond of trust has been broken.”

“What Northam said Saturday may well be true,” Levine wrote. “But at this point, how can he possibly lead Virginia?”

Sens. Tim Kaine and Mark Warner also issued statements pressing him to resign after the press conference, as has the rest of Virginia’s Democratic members of Congress. Virginia’s Legislative Black Caucus, the House of Delegates’ Democratic caucus, Senate Democrats and Virginia’s Democratic Party all issued similar demands after Northam addressed the media.

The Arlington Young Democrats wrote in a statement that they believe “Gov. Northam can no longer serve effectively and must resign immediately” after the press conference, while the county’s full Democratic Committee called for his resignation before it (and its Twitter account has since retweeted a variety of demands that he resign after he spoke to reporters).

The rest of Arlington’s state legislative delegation has yet to re-up their statements demanding Northam’s removal, but they unanimously supported their caucuses’ calls for the governor to step down in social media posts ahead of his press conference.

I stand with @VaBlackCaucus and call on the Governor to resign. https://t.co/MpHY4z9Z5m

A painful day. Gov Northam has given years of service to his country & Virginia. However, symbols of racial oppression should never be treated lightly – especially considering Virginia’s painful history. I stand w/my Caucus in urging him to resign & help restore the public trust. https://t.co/ErLxZ4IkrF

I stand behind the House Democratic Caucus’s statement. https://t.co/dwdjKNR0lY

The @VASenateDems stand united in calling for Governor Northam to step down. https://t.co/WNsinvb36x

I struggle to reconcile the violence and disrespect for dignity of others conveyed in this image with my personal experience of Gov Northam as a decent, compassionate man. But the implication is clear. For the good of a Virginia where every citizen is valued, he must step down.

Beyer’s predecessor and longtime Rep. Jim Moran was one of the few voices defending the governor Sunday.

“I do disagree with their judgment because I think it is a rush to judgment before we know all of the facts and before we’ve considered all of the consequences,” Moran said on ABC’s “This Week.”

Northam said Saturday he’d consider resigning if he felt he could no longer govern effectively, but it’s unclear what would happen should he refuse to do so. The General Assembly could look to impeach Northam, though constitutional scholars are split on whether this controversy would rise to the level of misconduct required for impeachment.

Should Northam ultimately step down, Fairfax would become just the second African American governor in Virginia’s history, and its second youngest as well.

Virginia governors are generally limited to one term in office, but Fairfax, who was widely expected to run for governor in 2021, could be in the unusual position of filling out Northam’s remaining two years in office, then running for a full four-year term. Scholars are also debating the logistics of that matter, and just how Fairfax would find a new lieutenant governor should he ascend to Northam’s seat.