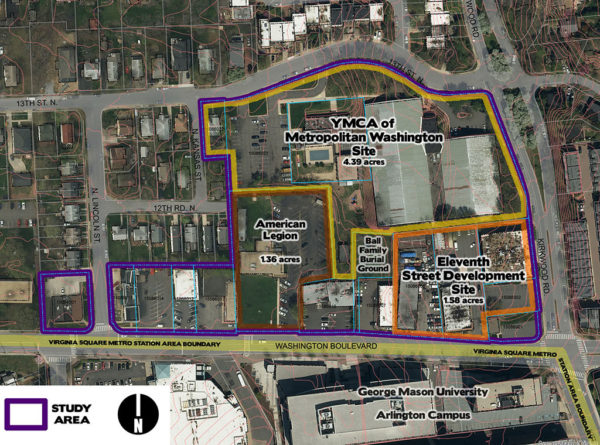 County officials could soon change how they sign off on major zoning alterations, sparking some pushback from the county’s business community over fears that the new process could make large redevelopments more difficult.

The county is currently mulling an overhaul of its methods for reviewing applications for special “General Land Use Plan” studies.

The GLUP is Arlington’s primary policy guide guiding development around the county, and property owners and developers can request a special study of a specific area if county leaders have yet to adopt zoning standards for a property, or if they’re proposing changes outside the scope of what the county envisioned for the area. A GLUP study most recently charted out changes in Virginia Square, clearing the way for the planned addition of a new affordable housing complex and new apartments along Washington Blvd.

But county staff have had trouble handling the workload of special GLUP studies requests recently, which has been particularly impactful for one prominent shopping center: the Village at Shirlington. The development’s owner, Federal Realty Investment Trust, has hoped for a study since December 2017, with the eventual goal of adding more density on the property. The company is also weighing putting a new apartment building on the parking lot at the corner of S. Arlington Mill Drive and S. Randolph Street.

But the firm would need an amendment to the county’s land-use plans to make those changes happen, and that will only come with a special GLUP study. Accordingly, the process has been closely watched by county developers eager to learn more about how it might change.

In a Jan. 22 meeting of the county’s Long Range Planning Commission, Arlington staff laid out a series of proposed changes to GLUP study applications. In a bid to make the process “more efficient and streamlined,” cutting down on staff time devoted to the issue, applicants would have to provide more detailed information on proposed changes up front, including 3-D models of the property and a more robust analysis of transportation impacts from the development.

Staff also hope to limit study applications to June 1-Sept. 1 each year, with the goal of passing along reports on the study requests to the County Board by the following February. Applicants would also be required to pay an “initial review fee” before even filing a full GLUP application.

But those proposals drew the ire of the Arlington Chamber of Commerce, with CEO Kate Bates writing in a Jan. 18 letter to county officials that the changes will “likely have the unintended consequence of hindering economic development in Arlington.”

While she acknowledges that the changes might create “workflow certainty” for county staff, she warned that could come at “the cost of lost opportunities for Arlington” by dragging the process out for too long.

“Arlington prides itself on being a community with a forward-looking, progressive planning policy but this proposal is clearly a step back,” Bates said.

Bates believes that any study proposed in “June of one year could be queued to be heard at the end of the following year and approved in the year after, possibly creating an almost two-year delay before even beginning the site plan process.”

“The chamber is confounded how adding a possible two years to an already lengthy process could be considered efficient,” Bates said. “The chamber also wonders how a process so opaquely envisioned, without soliciting input from affected businesses or citizens, could lead to more inclusivity. Again, this proposed fix is out of scale with the issues it is hoping to remedy.”

Bates is instead urging the county to leave the current GLUP study process in place, but dedicate more county workers to handling the study requests. That could be challenging, however, given the county’s current mix of a hiring slowdown and the elimination of some county positions during a difficult budget year.