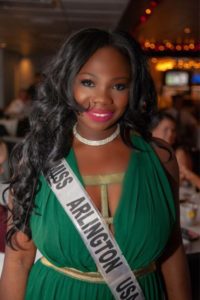 Whether it was entering a beauty pageant or a 10-day immersive therapy retreat, Arlingtonian Grace Ashi — AKA Miss Arlington USA 2019 — has marked the last year as one of immense personal growth in overcoming her stutter.

“I was born with a speech disability, I wanted to basically put myself in a position where I could grow and I can inspire people who might suffer from a disability they could do it,” said Grace Ashi.

Grace Ashi, who works at Keller Williams realty by day, grew up in Cameroon and Maryland, where her stuttering led to bullying and scared her away from public speaking.

Ashi had a friend in Maryland who had entered a pageant two years ago, and when it was first suggested that she enter the pageant to work on her public speaking, she was largely unfamiliar with the concept. Though she’s always had a great interest in fashion and has her own fashion blog, she thought pageants sounded superficial (although she’s ashamed to admit that now).

The Miss USA competition (not to be confused with the Miss America pageant of the famous theme song and Atlantic City background) is a part of the Miss Universe pageant, which is an entirely separate circuit.

The Miss America pageant made headlines announcing they would no longer judge contestants on physical appearance or recognize the swimsuit competition.

“It’s like getting ready for the Olympics, because you have to have your body right, your mind right and your community service, while preparing to foster relationships,” said Jasmyne Franklin, who represented Falls Church at the pageant.

While she had an amazing experience at the pageant in Norfolk Sheraton, Ashi stops short of calling the experience a vacation.

“We were up and running sunrise to sunset,” said Ashi. “It’s a lot more work than it looks like.”

As for the swimsuit competition, 2016 Ms. Virginia America Marta Bota explained, “it’s really about showing physical fitness, which is about showing a woman is well-rounded.”

Bota was also Ashi’s personal coach and said that Grace’s story inspired her, though that’s par for the course for her contestants.

“A lot of people don’t realize the work that goes into pageantry, as well as how educated they are and what kind of pillars to the community they are,” she said. “It’s really been amazing to mentor these amazing women and I get a lot out of it myself.”

Bota worked with Ashi for six weeks, which is generally late in the process to prepare for the pageant. Typically, contestants train a year or so in advance.

Bota estimates that this might have limited her chances of advancing, but that she did an incredible job under the circumstances, citing her as a quick worker and a great student.

“She’s a really bright young woman, she’s go-getter, she’s ambitious, that’s what I got out of her,” said Bota. “I’m sure if she comes back, she’ll do even better.”

In addition to her traditional pageant training, Ashi also attended the Hollins Communications Research Institute in Roanoke. There, she participated in a 10-day immersive therapy program that included 100 hours of therapy for people with stuttering disorders.

“It was my first time meeting other people suffering from the same thing I’m going through,” she said. “I learned how important it is that we need people like me to give me a voice and it was my first time being comfortable with my version of the story.”

Through the course of an orientation and pageant weekend this past fall in Norfolk, Grace found a lot of camaraderie and felt as if it were more of a sisterhood than a competition. Franklin and Ashi keep in touch with the other contestants through a chat group.

In fact, one night during the competition, Ashi came back to her hotel room and found one of her friends gave an inspirational note, along with a gift from Franklin.

But these days, she’s back to her day job as a realtor with Keller Williams, which comes with its own challenges.

“Most people with any kind of speech impediment would avoid working in sales but I do not want the stuttering to control my destiny,” she said. “That’s not to say it’s been easy. Sometimes insecurities of my speech does hold me back from putting myself out there.”

She also runs a fashion blog, “Girl Meets Pearl” in her spare time, and has documented much of her journey with the followers of her blog through her Instagram account.

As Miss Arlington USA 2019, Ashi is a delegate of the community and works to advance her platform — in this case, combating bullying — through volunteering, fundraising and advocacy work. She works at an after school program, Aspire Afterschool Learning, and hopes to host charity events, which would raise funds to expand those facilities.

“Even if I didn’t get win the competition, I can still use the title to get involved in my community,” said Ashi.

Ashi moved here from New York in 2015 and calls “Arlington one of the best cities I’ve ever been in my entire life” because of its cleanliness, diversity, and restaurant scene.

Next up, Ashi is considering competing in Miss United States.

For more of Grace Ashi, follow her on Instagram @Grace_Ashi and for more of Aspire, go to Aspireafterschool.org.