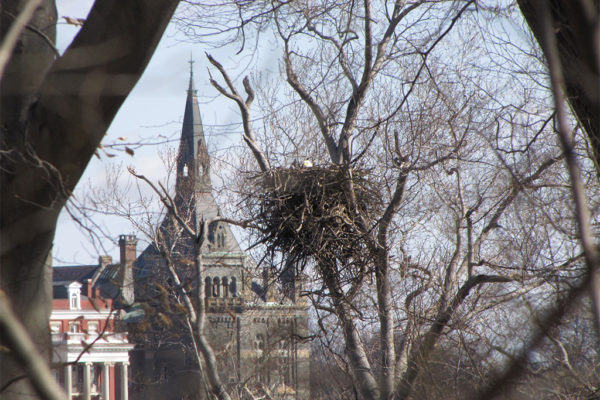 As has become something of an annual occurrence, an eagle nest has again been spotted in or near Arlington’s Ft. Bennett Park, overlooking the Potomac.

Though we haven’t heard of any eaglet sightings so far, county naturalists believe the behavior of the eagles that have been tending the nest suggests there are, in fact, eggs or hatched chicks inside.

“I too have seen the eagle sitting on what are likely eggs (maybe newborn?) on the nest,” wrote Arlington County Natural Resources Manager Alonso Abugattas. “An eagle sitting on there for extended periods of time that would suggest eggs or newly hatched young.”

“The current nest [is] located in a Sycamore tree between the south-bound and north-bound lanes of the George Washington Parkway,” David Farner, manager of the county parks department’s Conservation and Interpretation Section, told ARLnow. “It’s difficult to tell at this point whether there are eggs or recently hatched chicks or how many. But the behavior of the adults would suggest that they do have eggs or chicks. It’ll be few more weeks before any chicks will be big enough to be seen in the nest.”

ARLnow first reported on an eagle nest in Ft. Bennett Park in 2011. There have been a number of subsequent nestings, including in 2012, 2016, 2017 and 2018, according to news reports and Farner’s recollection.

Other D.C. area eagles have also been in the spotlight this month. At D.C.’s National Arboretum, an eagle pair dubbed Mr. President and First Lady are being watched for signs of egg laying, WTOP reported today, while the pair known as Liberty and Justice had their nesting attempt end in disappointment when a raccoon climbed into their nest and dined on an egg.