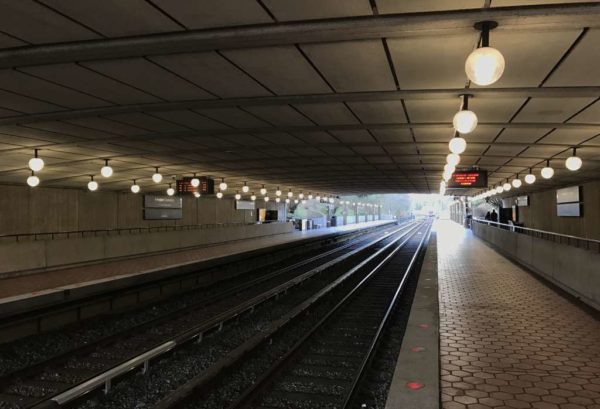 Several Blue Line trains barreled through Arlington Cemetery station without picking up passengers this past month as Metro gave little to no notice to riders.

Inbound Blue Line trains have not stopped at the station several times due to repairs, transit agency spokespeople told ARLnow, but riders waiting on the platform have few ways to learn they might as well have been waiting for Godot.

The trains have stranded passengers seven times since March 13, as seen by this reporter and according to alerts from transit tracker Metro Hero.

My Largo bound blue line train just blasted through Arlington Cemetary station without stopping, much less slowing down. Is this something new, @wmata? *… @unsuckdcmetro

The only alert for riders waiting on the platform during a March 19 incident was a loudspeaker announcement which, according to tipsters, was unintelligible on the echoing platform.

Spokespeople for the transit agency told ARLnow that trains were directed to pass through the station to arrive faster at Rosslyn, and avoid an ongoing bottleneck caused by a “signal problem” at Stadium Armory station.

“Because the issue involved the junction where three lines diverge, fewer trains could get through the area, and the delays were starting to grow as more trains arrived,” said Metro spokesman Ian Jannetta.

Three more Westbound Blue Line trains have skipped Arlington Cemetery this week, one on Tuesday and two more today (Thursday.) Trains also skipped out on the station on March 13 and 18.

Westbound BL/Franconia-Springfield Train 405 may have passed through Arlington Cemetery without picking up passengers on the track 2 platform. (7:46am) #wmata

The transit agency did post an alert that Blue, Silver, and Orange line riders may “experience minor delays when traveling through the work area” as upgrades are made to Stadium Armory until March 29.

The alert does not mention trains passing by the station, nor were there signs posted at the station by March 19.

Jannetta said passengers on the selected train were alerted two stops from the cemetery that the train would not be stopping there. He added that the transit agency’s reimbursement for late trips applies to anyone affected.

“Arlington Cemetery ridership during the AM commute is extremely light, which factored into the decision making process,” Jannetta told ARLnow. “On the other hand, the action benefited several hundred customers aboard trains approaching Rosslyn.”

Arlington Cemetery experiences the largest ridership increase of any Metro station during the Cherry Blossom season, per Metro’s now-defunct planning blog. Earlier this month, Metro cancelled some track work in Arlington in anticipation of the arrival of the tourists.