We need to talk about “gimmicky” beers. You know, the ones with cookies, cereal and the like thrown in.

I see and hear a lot of disproportionate anger about them; especially of course, on social media, which seemingly explodes daily over some new somebeer-or-other. Even I found my hackles momentarily raised last week, with the arrival of Captain Lawrence’s Cookie O’Puss.

If you don’t know — and if you don’t, take a moment and appreciate the life choices that brought you to a place where you don’t have to know — this is a “Pastry Stout” made with the ice cream, fudge and “chocolate crunchies from the famous (infamous?) ice cream cake, released to celebrate Carvel’s 85th Anniversary. 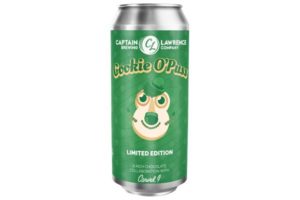 I don’t know why this one got to me: If you’ve shopped at Arrowine, you know I try to balance carrying what I like and find interesting with the trendy beer releases customers are looking for. Also, I’m a comic book reader and a wrestling fan — I can’t put on airs like I don’t appreciate a good gimmick.

Truth be told, I usually find my way into enjoying them, especially the Stouts. But here I was, drafting last week’s Newsletter, ranting about shameless cross-promotion and “synergy.” Getting mad is easy; staying mad takes work.

So I took a breath, and as I did some thoughts came to mind, coalescing into something that goes like this: Every beer style alive today has survived, thrived even, because of marketing.

Discovering that the origin story of IPA we all are told is a myth is a rite of passage for beer geeks, but it resurrected a style that continues to carry the segment. Porter was named for the working class drinkers partial to it in the 17th and 18th centuries; the coding of that name, the imagery it evokes, allowed Porter (and it’s offshoot, Stout) to be marketed to all classes over the past century, as it is today.

The paler, lighter Festbier had largely supplanted Märzen as the Oktoberfest beer of choice in Munich by the 70s. American breweries used the name to market a more exaggerated approximation of the “original” style — essentially what would otherwise be called Amber Lager — which came to be known as “Oktoberfest” here in the States.

TL;DR everything is copy. Or, to paraphrase Alan Moore with my greatest apologies: Milkshake IPAs and Pastry Stouts are imaginary styles. Aren’t they all?

I deleted my rant, made a dumb meme and moved on. Nothing to get mad about.

Read more →
More Stories
Open Houses in Arlington This WeekendVideo: Trees Are Good For Your Wallet