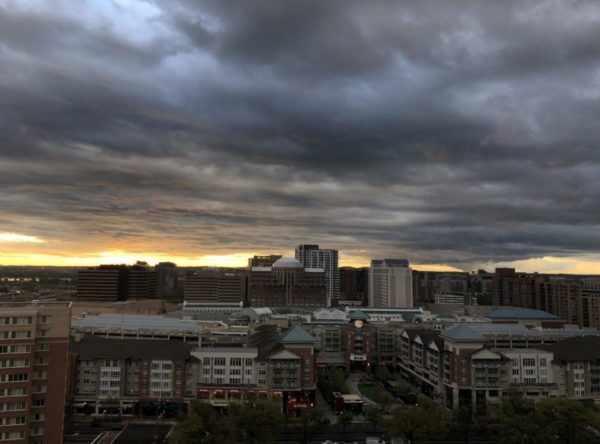 Tree Falls in Aurora Highlands — A large tree fell across 23rd Street S. in Aurora Highland, near Crystal City, yesterday evening around 5:15 p.m. It happened near the Our Lady of Lourdes Catholic church, between S. Ives and Hayes streets, amid gusty winds that felled other trees and branches around Arlington. The tree reportedly fell on a passing car, but those inside the vehicle were not injured. [Twitter]

Challenger Presses Favola — “Affordable housing and ethical issues took center stage as Democratic contenders for the 31st state Senate seat last week squared off for the first time leading up to the June 11 primary. Facing an uphill battle to knock off a two-term incumbent, challenger Nicole Merlene pressed the case that state Sen. Barbara Favola is too beholden to special interests to effectively represent the district.” [InsideNova]

Overturned SUV Along I-395 — Around 6 p.m. Sunday, an SUV overturned on a ramp to I-395 near Washington Blvd. A photo sent by a tipster shows the SUV on its side near the guardrail. No serious injuries were reported. [Twitter]

Small Explosion in Falls Church Condo — “At 11:10 a.m. today, a contractor working on a stove received minor injuries from a gas flash explosion in a unit at the Falls Chase Condominium, located at 1136 S Washington St. Arlington Fire and Fairfax Fire Departments responded to the scene.” [City of Falls Church, Twitter]

Nearby: Peeping Tom in Falls Church — “City of Falls Church police are looking for more information regarding a peeping tom seen outside of Saint James Catholic School.” [Tysons Reporter]

END_OF_DOCUMENT_TOKEN_TO_BE_REPLACED

More Stories
Closing Time: The Last Days of Mister DaysACFD On Scene of Fire Across from Clarendon Whole Foods