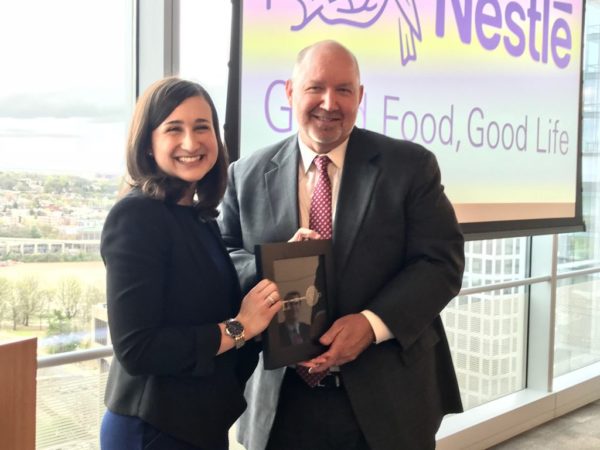 The Arlington County Board is poised to approve $1.7 million in state and local funds to incentivize Gerber to move its headquarters to the county.

The Board is scheduled to vote tonight (Tuesday) on whether or not to give $862,500 in state funds to baby food maker Gerber Products Company. Another $862,500 will be allocated for infrastructure improvements around the Rosslyn area, where the company’s headquarters will be moving.

The money is part of a bid enticing Gerber to make good on its promise to relocate its headquarters and 150 jobs to Rosslyn. Gerber parent company Nestle has already moved in to its new Rosslyn headquarters.

A staff report to the Board says $862,500 will come from the state’s Commonwealth Opportunity Fund (COF). It will be sent to Gerber via Arlington’s Industrial Development Authority “upon Gerber’s submission of a Certificate of Occupancy and with evidence that Gerber’s Chief Executive Officer has moved his or her office and operations to the facility.”

The incentives are intended to help Gerber build out its headquarters. More from the staff report:

The agreements require signatures by the County Manager on behalf of the Arlington County Board, by the Chair of the IDA, by the President and CEO of VEDP and by a representative of Gerber. The agreements contain the following requirements, among others:

If the Board approves the plan, it will allocate $862,500 in funding to a handful of infrastructure projects already in motion:

The funding vote is currently listed on the Board’s consent agenda, which is typically reserved for topics members intend to pass without debate.

Gerber was acquired by Nestlé in 2007 and has pledged to invest $5 million in relocating to Arlington. Nestlé has set up shop in its 250,000 square-foot office space in Rosslyn and promised to bring 750 jobs to the county.