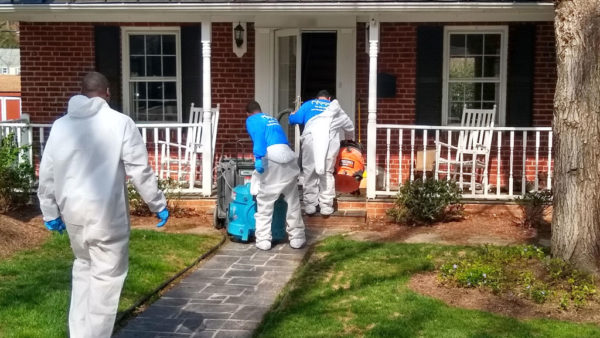 “Typically, our maintenance program calls for inspections of our sewer pipes every four years; however, we have more aggressive schedules of 1, 3 and 6 months for known problem areas,” said Jessica Baxter, a spokeswoman for the Department of Environmental Services.

“Given the most recent blockage on April 7, 2019, Water Sewer Streets crews will now be monitoring, inspecting and cleaning this location on a six-month rotation,” Baxter added.

Sewage flooded five homes on N. Powhatan Street on April 7, which required crews to work through the night to address the underlying blockage, ARLnow previously reported.

“Three houses on the street were flooded with county sewage both in [2008] and in 2001,” wrote three Madison Manor residents in a letter to ARLnow this week. “On April 7, when the county sewage system failed us for a third time, five houses were affected.”

Tree roots blocking the sewer main caused the first two floods, Baxter said, with debris in the sewer main causing the most recent backup. The county lined the pipes in 2002 to protect from intruding tree roots, she said. It also added a second pipe segment downstream in 2008 to improve flow.

Each flood of raw sewage cost homeowners tens of thousands of dollars, according to copies of bills and insurance claims reviewed by ARLnow.

One neighborhood resident, Anne Riley, said her home was flooded all three times, with the latest flood costing $18,000. She wrote in an email that she is submitting a claim to her homeowners insurance but will have to foot her policy’s $2,000 deductible.

“Three times in 20 years is ridiculous,” Riley said. “We don’t even know all we lost.” 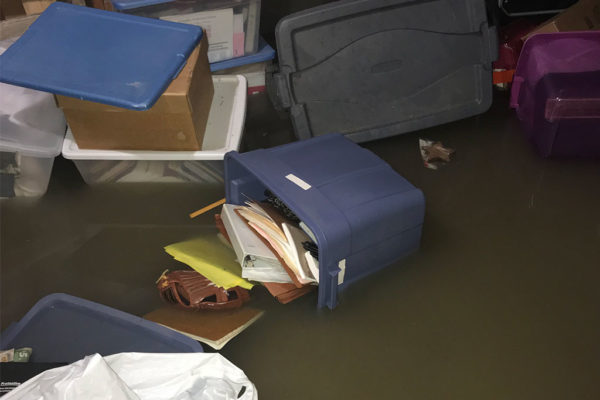 Another neighbor, Dave Oaks, said he couldn’t supply receipts for the flood damages to his home in 2001 and 2008 because they were stored in boxes in the basement — which were destroyed in last month’s flood.

Oaks noted the damages from this year’s flood will “run into the tens of thousands” and shared the costs he’s incurred so far:

Neighbor Karen Lewis cited similar costs for the April flood. She told ARLnow that she spent $9,900 so far to inspect the furnace and remove her basement’s contaminated drywall, carpeting, downstairs shower, and hot water heater.

“Our homeowners insurance company estimates the rebuilding costs will be at least $16,000, before even beginning to replace our destroyed or contaminated furnishings and possessions,” she said.

Neighbors added in their letter that the county crews increased the damage to their homes while fixing the backup because crews had “blasted additional water through the system to test and flush it, causing our basement drains and toilets to spew additional gallons of water into our basements and raising the filthy flood several more inches.”

Neighbors told ARLnow the county did not provide information about whether their houses were safe to stay in during the clean-up process.

“The county is not responsible for the clean-up of individual homes in the event of a sewer backup,” Baxter said this week, adding that the county can connect residents with emergency clean-up contractors. “Normally, it is up to the discretion of the resident, in consultation with the clean-up company, that makes the call to evacuate.”

Another concern for residents — whether their yards or the nearby Madison Manor Park were contaminated after sump pump discharge.

“Two of the residents affected previously had each installed two sump pumps in their homes,” the three residents said in their letter. “On April 7, those pumps were overwhelmed by the volume and force of the sewage back-up, and a swamp of human waste was pumped out of their basements for hours, next to the bike path.”

Baxter said county crews worked through the night on April 7 to clear the blocked line. She told ARLnow at the time that the county applied a disinfectant to the ground where contamination may have occurred.

After the last sewage backup one family even tried to take measures to ensure it would not happen again — to no avail.

“In addition to installing two sump pumps, these residents researched and purchased a valve that would protect their basement from incoming water up to 250 lbs. per square inch,” the letter said of the family. “This $850 valve was no match for the force of the sewage that blew threw it on April 7.”

Residents hoping to get the county to help pay their bills may, however, be out of luck.

A judge previously dismissed a negligence case that Harris Teeter filed against the county in 2013 for a sewage spill the company alleged cost them over a million dollars in property damage. Ultimately, the court dismissed the case according to court documents. A spokeswoman for the County Attorney’s Office confirmed there were no settlements afterward.