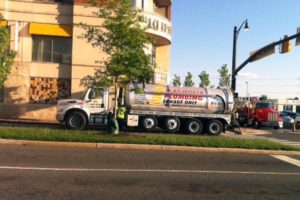 Arlington County is being sued for the sewage backup that has shuttered the Potomac Yard Harris Teeter supermarket for more than a year.

Harris Teeter’s insurers are seeking more than $1 million in damages from the county, claiming negligence led to the clog and backup that flooded the store with raw sewage in May 2012. As first reported by WJLA, the lawsuit was filed in U.S. District Court on Sept. 17.

In the lawsuit, the insurers claim that Arlington failed to properly maintain its sewage system and ignored warnings of potential equipment failure before the clog. Reached by ARLnow.com, Arlington County officials declined comment, citing the pending litigation.

Harris Teeter said last month that it plans to reopen the Potomac Yard store, at 3600 S. Glebe Road, at some point in October.