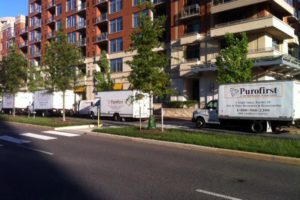 Officials say a clog at the Arlington County Water Pollution Control Plant is what caused raw sewage to flow into the Harris Teeter supermarket on S. Glebe Road, near Potomac Yard.

The incident started on the morning of Friday, May 11. An excess buildup of rags and debris got into a pump station and clogged the station’s suction lines, according to Water Pollution Control Bureau Chief Larry Slattery. A sewage line then started to back up, ultimately leading to an overflow of raw sewage into Harris Teeter and the parking garage adjacent to the store.

Harris Teeter is closed indefinitely while crews work to sanitize the store.

Slattery said the sewage wound up in the store because it’s located “near the lower end of the collection system” — only a short distance across Jefferson Davis Highway from the Water Pollution Control Plant. He was unable to confirm how much sewage flowed into the store and the parking garage.

Temporary pumps were put in place by early Friday afternoon to help clear out the sewage backup. The debris was cleared out of the pump station and the sewage system was back to normal early Saturday morning, Slattery said.

“As soon as we figured out what [the problem] was we took steps as fast as possible to correct the issue,” he said.

As a result of the incident, Arlington County will now be increasing the frequency of sewage pumping system cleanings from once every year to once every three months. The pump that became clogged had last been cleaned out in January, according to Slattery.

“We’re taking steps to check out the sanitary sewer lines,” Slattery said. “That’s not the kind of customer service we want to provide. We don’t want this to ever happen.”