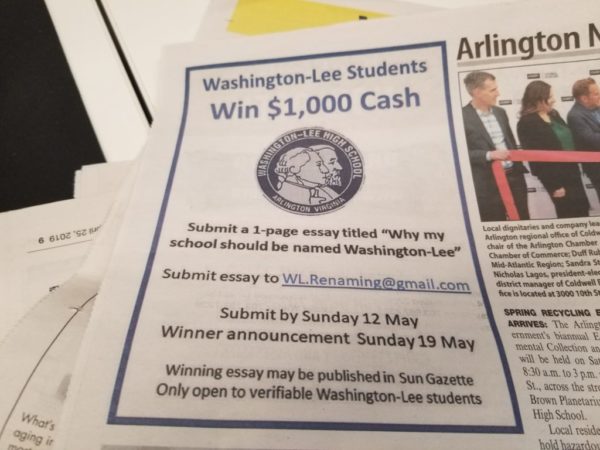 The Sun Gazette ran a mysterious ad in this week’s paper, offering W-L students who write an essay about “why my school should be named Washington-Lee” the chance to “win $1,000 cash.”

The ad did not specify who was running the contest, and only said submissions to be sent to [email protected] When contacted, a man identifying himself as Tom Hafer of McLean responded and said he was organizing the contest.

Hafer told ARLnow he’s a W-L graduate from the class of ’66 who has lived in Arlington for most of his life before moving across county lines.

“The money is from my own pocket unless some of my like-minded colleagues decide to help defray,” Hafer said when asked about the contest’s funding. “At this point, I am doing this on my own but I will likely enlist some other readers if there is significant competition among essays.”

Currently he says he’s received no essay submissions, but he doesn’t “expect too many until closer to the [May 12] deadline.”

The School Board voted unanimously to rename the high school “Washington-Liberty” in January. When asked what he thought the essay contest could accomplish after this fact, Hafer said it was a symbolic act.

“This essay will give the students of W-L a voice on this issue that was denied them by the School Board, and will give members of the public an opportunity to hear that voice,” he wrote in an email. “I believe that if the students had been allowed to vote on the name of THEIR OWN SCHOOL that it would be Washington-Lee — forever.”

Earlier this month, Hafer called the renaming a “diversity sideshow” in a Letter to the Editor published by the Sun Gazette.

Last June, Hafer accused the School Board of “hypocrisy, deceit, ignorance and malfeasance” during a public meeting on the renaming, reported the Falls Church News-Press.

Hafer’s ad this week said that the “winning essay may be published in Sun Gazette” but that the contest was “only open to verifiable Washington-Lee students.”

He clarified that he does not have an agreement with the paper to publish any essays.

“When I see whether any of the essays are worthy of publication I will see whether the Sun Gazette wants to print it,” he said. “If not I may simply put it in as an ad.”