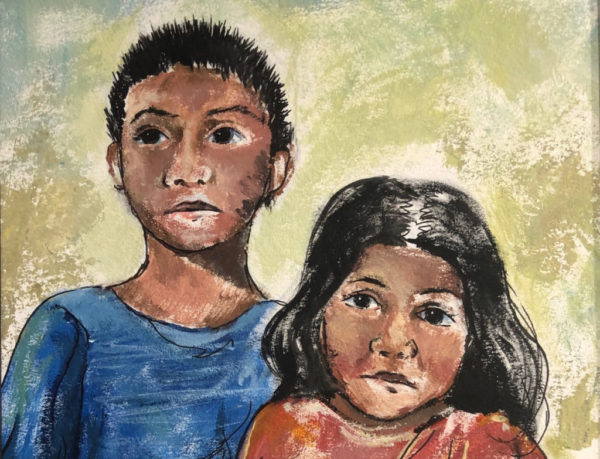 (Updated at 10:40 a.m.) A powerful painting about immigration by a Yorktown High School student is now set to hang in the U.S. Capitol.

The art features two young children looking to the side with pinched expressions while one of them holds a sign that reads, “Bring Our Mom Back.”

The artist behind the work is 17-year-old Dominick Cocozza, who notes on his website that his passion for art began “at a very young age”.

Cocozza won the Congressional Art Competition, which seeks art from young makers each year and is judged by local art educators. The art can be any of several mediums, and the winning artwork is displayed for a year in the U.S. Capitol Building.

“For this particular piece I was inspired by “Immigrant Children” who have been separated from their families!” Cocozza told ARLnow in a social media message, referring to the painting’s name. “I want to illustrate this particular issue to inform my peers of this ongoing crucial conflict.

He added that he was adopted from Central America as a baby but that the painting doesn’t represent his experiences.

“I am honored to have my work displayed in the capitol and I hope it can spark understanding to my audience,” Cocozza said.

He says he painted the work as part of his AP Studio Art class at Yorktown. It was honored yesterday during a ceremony for competition which was held in the 8th District of Virginia this year.

Rep. Don Beyer (D-Va.) represents the district and told ARLnow he was proud to have Cocozza’s painting “Immigration” represent the district on Capitol Hill.

“His work expresses feelings many of my constituents share,” Beyer said. “It will make a strong impression on the members of Congress, staff, visitors, and tourists who pass it every day. I congratulate Dominick and Yorktown High School for this accomplishment, and thank the many talented young people whose collective work again made for a very competitive Congressional Art Competition.”

This year’s Congressional Art Competition winner, Dominick Cocozza, is a student at @YorktownHS.

His painting, titled “Immigration,” will hang in the US Capitol for the next year. It is very striking: pic.twitter.com/Wu6G4bPonC

Continuing the immigration theme, the high-schooler posted another 24 by 30 inch painting on his Instagram called “The Letter,” which shows a woman covering her face with her hands. Behind her a letter pleads for someone to “Please stop separating families at the border.”

“I chose to paint this in response to what’s currently going on in the United States,” Cocozza wrote in the image’s description.