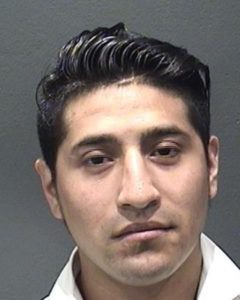 Arlington County Police have arrested a 25-year-old man for an alleged sex assault in a Clarendon restaurant over the weekend.

Police say the crime happened around 11:45 p.m. Saturday at a restaurant on the 3000 block of Clarendon Blvd, a block from the Metro station.

A woman “was cornered by the known male suspect inside a walk-in freezer, preventing her from leaving the area,” ACPD said in a press release. “The suspect then allegedly inappropriately touched and sexually assaulted the victim before fleeing the scene.”

The press release implies that the victim and the suspect both worked at the restaurant, which was not named.

The Arlington County Police Department’s Special Victims Unit is investigating a suspect charged with sex offenses and is seeking additional information and possible victims. Duglas Santos, 25, of Arlington, VA was arrested and charged with Abduction, Object Sexual Penetration and Sexual Battery. He is being held without bond in the Arlington County Detention Facility.

At approximately 11:46 p.m. on May 4, police were dispatched to the late report of an assault inside a restaurant in the 3000 block of Clarendon Boulevard. Upon arrival, it was determined that the female victim was cornered by the known male suspect inside a walk-in freezer, preventing her from leaving the area. The suspect then allegedly inappropriately touched and sexually assaulted the victim before fleeing the scene. Officers conducted surveillance in the area and took the suspect into custody the following day when he returned to work at the restaurant.

Based on the preliminary investigation, it is believed the suspect has held positions in restaurants throughout Arlington County and there may be additional similar incidents. Anyone with past inappropriate encounters with this suspect or who has additional information related to this investigation is asked to contact Detective H. Molina of the Arlington County Police Department’s Special Victims Unit at 703-228-4208 or [email protected] Information may also be provided anonymously through the Arlington County Crime Solvers hotline at 1-866-411-TIPS (8477).