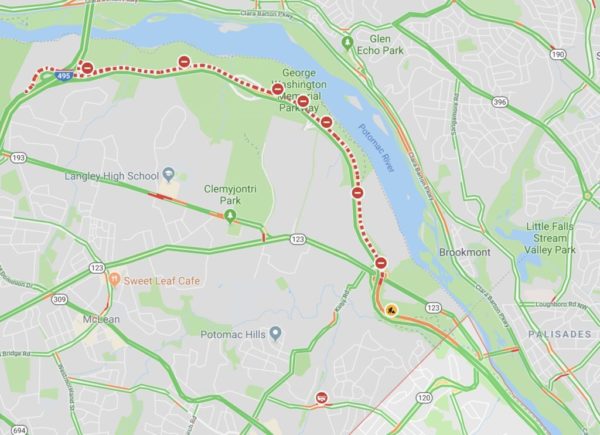 Earlier: The northbound lanes of the GW Parkway are closed just north of Arlington due to a large sinkhole.

Sinkholes have been a recurring problem on the Parkway, with the most recent sinkhole-related closure happening in March.

The Parkway’s northbound lanes are currently closed from Route 123 in McLean to the Beltway, with traffic backing up prior to the detour onto 123. The National Park Service issued the following press release about the closure Friday night.

The U.S. Park Police and National Park Service have closed the northbound lanes of the George Washington Memorial Parkway from Virginia Route 123, Chain Bridge Road to I-495 the Capital Beltway. The closure began around 6:45 p.m. when a U.S. Park Police officer observed a sinkhole. The northbound George Washington Memorial Parkway will remain closed in that area as engineers and work crews fully assess and repair the road.  Southbound travel lanes remain open.

The National Park Service took this action to ensure public safety, and no accidents have been reported.  Staff have continued to monitor the parkway since March when a sinkhole developed in the same area next to Dead Run.

The George Washington Memorial Parkway is a critical link in the national capital region’s transportation network, and closing it is never a decision that is made lightly. Drivers should follow local news or visit www.nps.gov/GWMP for the latest information.

Quick update-what we’ve done so far and what our next steps are. The immediate next steps require drier weather. pic.twitter.com/vupCwOCJjf