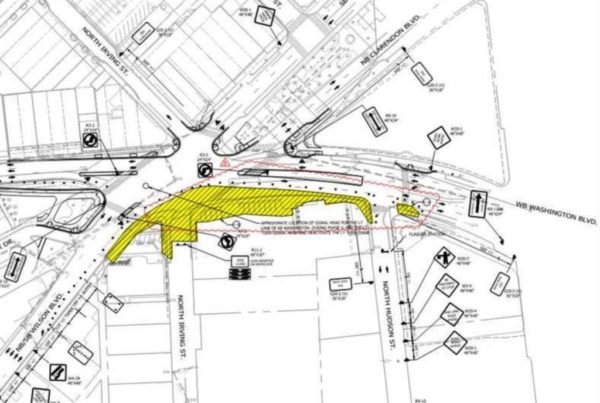 Construction is underway and turn restrictions are in place — now the “Clarendon Circle” intersection reconfiguration project is entering its third phase.

Starting as early as Monday (June 3), N. Irving Street, near Silver Diner, will be blocked off at the busy intersection where Clarendon, Washington and Wilson boulevards all meet. Irving Street has “low traffic volumes,” according to Arlington County, and the permanent closure will — along with the new no-left-turn from Washington Blvd to Wilson Blvd — help simplify the intersection.

Phase 3 of the project will move the focus of construction to the south side of the intersection, starting next week. More details via a construction update from Arlington County:

Next phase of construction starting June 3

As sidewalk work wraps up near Bar Bao, the contractor is preparing to start the next phase of construction on the south side of the intersection on June 3.

The next phase will take about six weeks, weather permitting. Crews are expected to start working near the Silver Diner and then progress toward the Wells Fargo Bank.

Per the project design, green streets elements will be added at the end of this street.