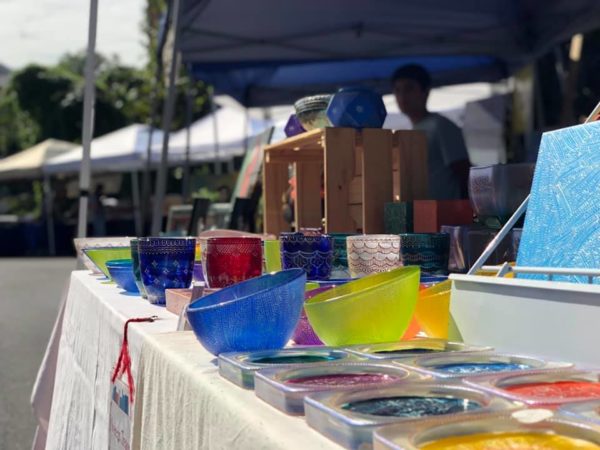 New District Brewing Company has announced that Valley Fest will return on Sept. 29, but in the meantime, there’s honeysuckles to pick and a North-South Arlington grudge match to settle.

The event is planned to be held on the street outside the brewery at 2709 S. Oakland Street. Entrance is free with community arts and music planned for the festival, along with food and dessert trucks. A “beer package” is also available for $22, good for three tickets to sample New District beers.

Valley Fest started in 2017 as a smaller festival but expanded in 2018 as a plan to replace Capitol City Brewing’s Oktoberfest after the brewpub closed.

New District founder Mike Katrivanos told ARLnow that much of the festival will be similar to last year, but with a heavier focus on artists.

“We are getting a lot more artists this year,” Katrivanos said. “Last year, we did this cool thing where we had an artist do a piece featuring tires from the auto shops nearby. She actually made the tires into art pieces like wavy walls set up throughout the festival.”

This year, Katrivanos said he’s hoping to have a metalworking artist display their work at the festival. An artist hasn’t been selected yet — that’s expected to happen happen in July — so if anyone knows any metalworking artists they’re encouraged to reach out to the brewery for some potential work.

In the meantime, Katrivanos said there are some Arlington-focused events and features at the brewery.

“We did a North-South Arlington collaboration beer with The Board Room up in North Arlington,” said Katrivanos. “We called it Crossing Route 50. The North Arlington crowd doesn’t want to cross Route 50, so we tried to build a bridge.”

The beer is a grapefruit IPA, which Katrivanos described as having the aroma of dank citrus and tropical notes from the hops.

The other event coming up is the honeysuckle harvest, where the brewery takes 30-50 volunteers on a road trip to pick honeysuckle from various parts of Virginia. Mostly the group visits farms and parks, where honeysuckle — an invasive species — is seen as a weed.

“We bring it back to the brewery here and brew a honeysuckle hefeweizen with the fresh flowers,” said Katrivanos. “It captures all the aromatics — captures the sweet flavor of the honeysuckle and reminds you of Virginia summer. That beer is one of our beers people know us by. We’re actively campaigning for that now and we’ll be picking honeysuckle.”

For anyone interested in a weekend honeysuckle road trip, Katrivanos said to contact Michael Sutherland at [email protected].