“So, what’s your favorite?”

It’s early in the week and I’m not expecting the question. My mind is pre-occupied forming orders, placing orders, writing Newsletters in my head or on my laptop, and trying to write the column in my head all at once. The customer sees she’s caught me off-guard, apologizing, relating it to being asked if she had a single favorite wine.

My type, if I in fact have one, are breweries that offer high quality, consistency and a sense of balance in their beers, regardless of what their lineup looks like. Over the years, breweries like Maine Beer Company, Allagash, Bell’s, Port City, Schlafly, Brooklyn and more have won me over this way, becoming one of my “go-to” breweries.

Reason Beer opened in 2017 to no small amount of buzz, founded by friends of over 20 years and Charlottesville locals J. Patrick Adair, Jeff Raileanu and Mark Fulton. Fulton’s involvement generated much of the interest.

Prior to opening Reason, he was the second full-time employee of Maine Beer Company, working as Brewhouse Manager, running its pilot beer program, and finishing up his four-year stint as Director of Brewery Operations, overseeing all brewing and packaging at one of the country’s most highly-regarded small breweries. So, kind of a big deal.

Of course, an impressive resume alone doesn’t make impressive beer. What Fulton has done at Reason is to take the aspects of Maine Beer that made it stand out — the consistently high quality; the elegance and balance found in even its boldest recipes — and apply them to an entirely new paradigm within Reason’s lineup.

The principles are simple — mostly, though not always, skewing lower in ABV. Recipes that have been refined to the point where you just know the homework has been done. Beers that are approachable, regardless of style, simultaneously showing off the best of each of their ingredients. 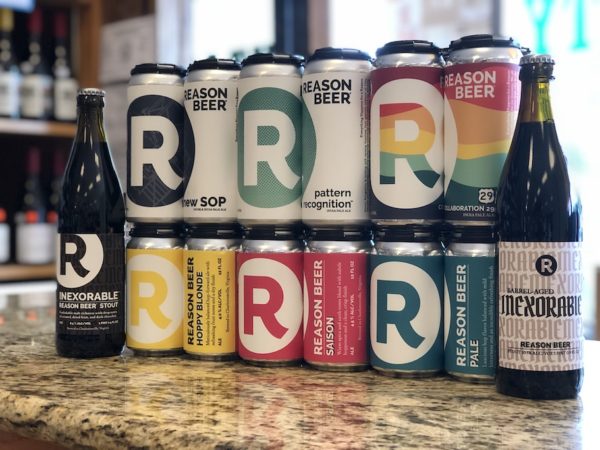 The Reason beer that won me over initially was Pattern Recognition, a 6% ABV IPA that features the smartest selection and application of hops I’ve seen in a long time, is crystal clear, and comes as close to translating the experience of opening a bag of hop pellets into a final aroma/flavor as anything I’ve had.

Don’t just take my word for it though — Reason Beer representative Devon Callan will be at Arrowine this Saturday, June 8 from 1-4 p.m. sampling their outstanding brews. Swing by and check them out!