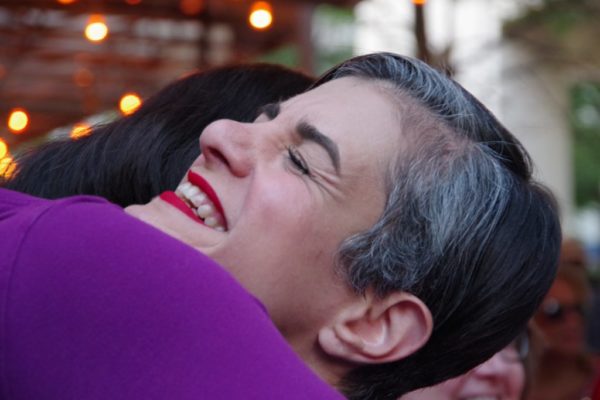 (Updated at 4 p.m.) Last night, commonwealth’s attorney candidate Parisa Dehghani-Tafti defeated incumbent prosecutor Theo Stamos in a surprise victory that shocked many in the the county, and left some wondering about the future.

“I think Parisa basically brought two very large groups together,” he told ARLnow today. “One are people newer to the county who really care about criminal justice reforms. The second was a coalition of people mad about internal Arlington politics.”

Tribbett said the first group is important because, “transient voters tend to get their info from national outlets.” He said the Washington Post’s endorsement of Tafti and the The Appeal’s critical look at Stamos’ handling of some juvenile cases could have helped sway those voters. The campaign even attracted an endorsement from multi-talented star John Legend.

A map of yesterday’s voting shows the densest support for Tafti was located along the county’s more dense and Metro-accessible areas — places where young transient voters often live. Tribbett pointed out state Senate candidate Nicole Merlene, who lost her race against incumbent Sen. Barbara Favola (D-31st), performed well in the Rosslyn-Ballston corridor but struggled in the leafier, single-family-home neighborhoods to the north.

Tribbett said Tafti’s other supporters, long-time residents fed up with Arlington politics, are part of the fallout from the election of John Vihstadt, who won the race for County Board in 2014 as an independent. Progressives are continuing a “decade-long war” against Democratic candidates like Stamos who supported Vihstadt over a fellow Democrat, Tribbett said, and could target County Board member Libby Garvey in the future.

But he said infighting costs the party influence at the state level, which comes at a time when Democrats across Virginia are striving to flip Richmond blue.

“What should have been a temporary rift has become a permanent rift,” Tribbett said. “It’s not good for the Democratic Party.”

Another perspective on the race comes from Paul Ferguson, current Clerk of the Circuit Court and former Arlington County Board member, who spoke to ARLnow in his personal capacity on Tuesday afternoon before polls closed.

Ferguson said Tafti has six months to settle in and choose which (if any) of Stamos’ assistant prosecutors she plans to keep on staff. (Stamos said last night she hopes her challenger will retain at least some of them.) Tafti will then be able to roll out policy changes, like her pledge to not prosecute low-level pot convictions, but Ferguson said it’s difficult to anticipate the impact because her victory is unprecedented.

“It’s reasonable to say in modern history, the last 40-50 years, the new prosecutor has always come from within the office, leaving very little policy transition,” he said. Nonetheless, he thinks it’s likely that there could be fewer misdemeanor cases cases in District Court, and perhaps fewer cases in Circuit Court, as a result of her changes.

Ferguson added that between the national coverage and over $600,000 in PAC donations, he’s never seen a local race generate so much interest in his 25 years in office. And he doesn’t believe it’s a passing trend, either. Citing recent national discussions over criminal justice reform topics like the debate over the federal 1994 crime bill, he said, “I think people are now more interested in issues relating to the judiciary system.”

The final voter turnout of around 17 percent was significantly higher than previous primaries on the same four-year election cycle, and the raw vote total nearly doubled that of the last such cycle in 2015, according to stats cited by Arlington Democrats today.

Yesterday's primary in Arlington drew 91% MORE VOTERS than 4 years ago (26,258 vs. 13,699). Good news as we press onward to flip the Virginia General Assembly blue on Nov. 5! #FlipItBlue #FiredUp

An independent candidate for commonwealth’s attorney, Frank Webb, filed to run Tuesday, apparently with the intention of challenging Stamos if she had won the Democratic nomination. Webb has since withdrawn from the race, per election officials.

“This election may have meant different things to different people. For me, it was always about reform,” Webb said on Twitter. “Arlington Democrats should be proud to have selected a reform candidate.”

This election may have meant different things to different people. For me, it was always about reform. Arlington Democrats should be proud to have selected a reform candidate. 2/

Voters will return to the polls on Nov. 5 to cast their votes in the other races, including reelection bids for Arlington County Board Chair Christian Dorsey and Board member Katie Cristol. Both are challenged by independent candidates Audrey Clement and Arron O’Dell.

END_OF_DOCUMENT_TOKEN_TO_BE_REPLACED

More Stories
New Pizza and Beer Restaurant Set to Open in Ballston Next Year‘House of Mandi’ Falls, ‘King of Koshary’ Rises in its Place