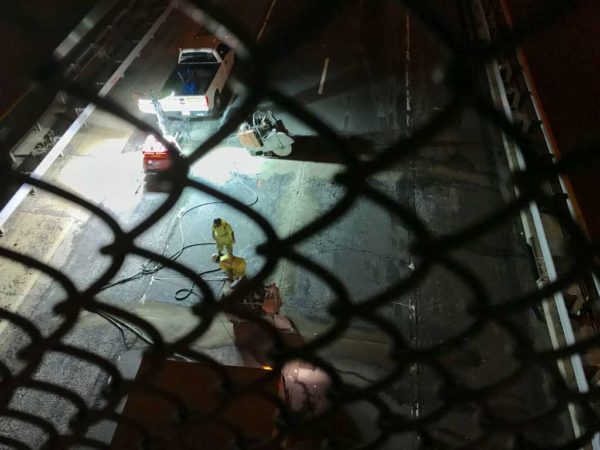 A proposed streetscape improvement project has revealed rising construction costs in Arlington County due to ongoing work to add new lanes to I-66 and I-395 — and associated projects.

“We believe the shortage of qualified contractors resulting from the abundance of work generated by the I-66 & I-395 Express Lanes projects is contributing to the higher than expected bid prices,” according to a county staff report.

The project in question — which “will reconstruct curbs and sidewalks to install [Americans With Disabilities Act] compliant curb ramps and sidewalk areas,” mostly along the Rosslyn-Ballston corridor — will be considered by the Arlington County Board at its Saturday (June 15) meeting.

The county selected Fort Meyer Construction Corporation, which submitted the lowest bid for the project at $718,580.97.

“We have observed a high volume of construction in the region because of many projects, including major ones such as the I-66 and I-395 Express Lanes, and this work is distributed over a limited number of qualified contractors,” Ramzi Awwad, the engineering bureau chief at the Department of Environmental Services, told ARLnow today (Thursday).

“Contractors have indicated they are paying more to compete for qualified laborers, and we have observed less competition in the form of lower numbers of bidders for some projects,” Awwad said. “The result is higher than expected costs in comparison to estimates.”

He added that this trend has affected other recent projects, especially in the last six months.

VDOT does not provide funding to offset the rising construction costs in Arlington, according to Awwad.

On Saturday, the Board will vote to accept Fort Meyer’s bid and could approve an additional $107,787 for the project in case costs rise further.

For now, the pedestrian proposal is still within the $2.02 million budget set for the two-phase project.

The pedestrian project aims to make eight areas in Rosslyn and Ballston ADA compliant by extending curbs, widening sidewalks, repainting crosswalks, and building new curb ramps. One of the sites is the intersection of 36th Street N. and N. Kensington Street, which aims to make students walking to Discovery Elementary School safer.

The seven other intersections slated for improvements are: