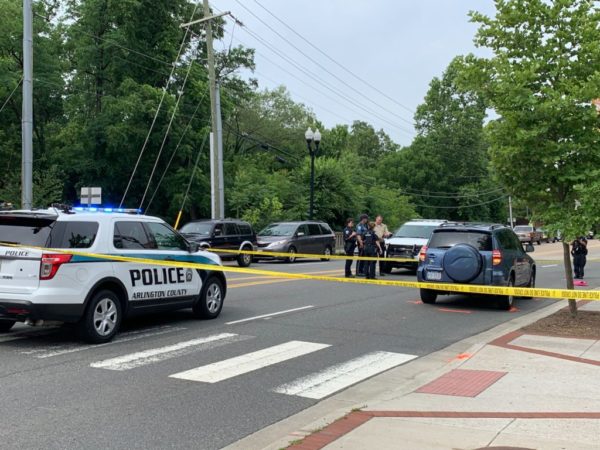 The first occurred Wednesday morning at the intersection of Columbia Pike and S. Four Mile Run Drive. The victim, a 77-year-old Arlington resident, died Thursday, police announced over the weekend.

At approximately 9:27 a.m., police responded to the area for the report of an accident with injury involving a pedestrian. Officers and medics arrived on scene and located the female victim suffering from serious injuries and rendered aid. The pedestrian was transported to an area hospital in critical condition. The preliminary investigation indicates that the victim was crossing the westbound lanes of Columbia Pike against the walk signal when she was struck by an oncoming vehicle. The driver of the striking vehicle remained on scene and detectives interviewed multiple witnesses.

The pedestrian, identified as Martha Saltos, 77, of Arlington, Va. was transported to an area hospital in critical condition. She later succumbed to her injuries and was pronounced deceased on June 13.

Anyone who may have witnessed this crash or has additional information regarding this investigation is asked to contact Detective S. Lafley at [email protected] or 703-228-4052. Information may also be reported anonymously to Arlington County Crime Solvers at 1-866-411-TIPS.

The second fatal crash happened Friday night, on N. George Mason Drive near Virginia Hospital Center. A 66-year-old Arlington man died from his injuries after being struck by a vehicle.

At approximately 10:51 p.m. on Friday, June 14, police responded to the report of a crash involving a pedestrian. The pedestrian, identified as Robert Bramwell, 66, of Washington D.C., was transported to an area hospital where he succumbed to his injuries and was pronounced deceased.

Based on the preliminary investigation, it is believed that the pedestrian entered the roadway outside the crosswalk and did not have the right-of-way at the time of the crash. The driver of the striking vehicle remained on scene and is cooperating with the investigation.

This remains on ongoing investigation and anyone with additional information related to this incident is asked to contact Detective T. Parsons at [email protected] or 703-228-4172. To report information anonymously, contact the Arlington County Crime Solvers at 866.411.TIPS (8477).