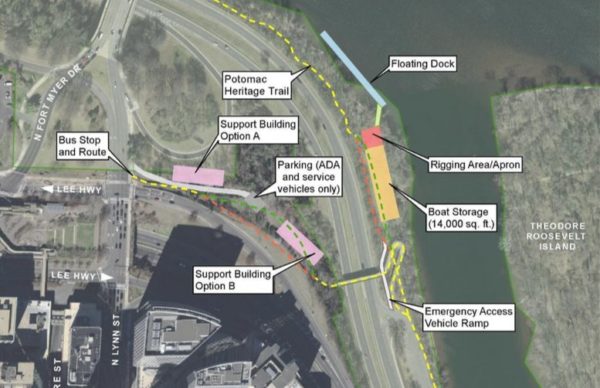 The Rosslyn boathouse project is one step closer to setting sail, thrilling some local officials but also facing opposition from some local residents.

The National Park Service ushered the project along to a new phase this week, announcing that the proposed site for the boathouse in Rosslyn will have no significant environmental impact. This closes NPS’ environmental assessment of where the boathouse could be located that has dragged on for seven years, and means the design phase can begin.

“I personally am thrilled about this possibility,” Mary-Claire Burick, president of the Rosslyn Business Improvement District, told ARLnow yesterday (Wednesday). “Access to the river is so important not only for the county but also for our residents and visitors throughout Rosslyn. I would say that the Potomac River is probably the greatest un-utilized recreational resource that we have.”

“I think we still have quite a bit to go in the process,” she added. “But I think this is a very important milestone.”

The resolution approved by the federation accused the Board of “not acting in accordance” with its standards for public planning processes. Members were upset about the Board initially slating the vote for the boathouse on their meeting’s consent agenda instead of planning a public hearing, the Sun Gazette reported. They also asserted that the county’s Park and Recreation Commission and the Environment and Energy Conservation Commission were not consulted about the plan.

Previously, the Arlington County Board voted unanimously to allow NPS to finish the environmental assessment of 2105 N. Lynn Street (formerly known as 1101 Lee Highway), the planned location for the boathouse. The County Board’s vote sided with NPS in eschewing an alternative site at Gravelly Point.

“Since the 1980s, Arlington residents have sought a community boathouse to provide access to the Potomac for recreation, education and fitness activities,” said Erik Meyers, Arlington Boathouse Foundation president. He added in a statement that he was “grateful” NPS brought the project closer to that goal.

“We are pleased to see this long-planned project pass such an important milestone,” said Jane Rudolph, director of Arlington’s Department of Parks and Recreation, in a statement.

Rudolph said the county looks “forward to continuing to work with our community partners to establish this resource to benefit all Arlingtonians.”

The current plans propose a 14,000-square-foot boathouse, a 300-foot-long dock, a facilities building with lockers and bathrooms, an access road, and a small parking lot.

Burick said the BID is committed to acting as “a community convener” to bring civic associations and other groups to table during the upcoming design phase of the project. She believed Rosslyn residents will be excited about the project, considering residents’ love for outdoor recreation and the site’s Metro accessibility.

Burick added that she is a Potomac paddle boarder and hopes that a boathouse on the Potomac’s Virginia shores will teach people to love the river as much as she does.

“I think it will bode really well for the health of the river because the more people who start using it fall in love with it,” she said.

When asked if she thought the boathouse project moving forward put wind in the sails of Arlington’s long-debated gondola project, Burick said it could be a useful transit option for the region to explore.