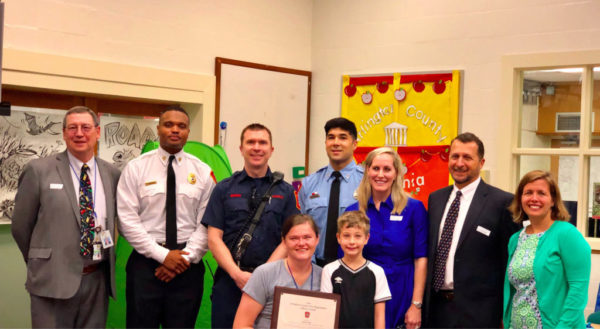 An Arlington teacher received a Citizens Award after saving third-grade student Grant, who was choking during lunch.

The Arlington County Fire Department and Arlington Public Schools recognized Jamestown Elementary teacher Jaimie Sapp last week after Grant’s father Roger had contacted the department to say how impressed he was by her quick actions.

“She was at lunch on Monday with his class and they’re all talking and eating and he choked on a piece of food,” said Roger, who asked not to use his last name to protect their family’s privacy. “And it completely blocked his airway and he couldn’t breathe.”

Roger told ARLnow today (Monday) that a week beforehand his family had talked with Grant about what to do if he was choking and taught him the universal choking sign.

As a result, Grant knew to hold his hands around his neck when he choked during lunch, and his fellow students started screaming to the teacher for help. Sapp rushed over and performed the chest thrusts of the Heimlich Maneuver — but it didn’t work.

Then Sapp tried the maneuver’s back slaps and was able to dislodge the food choking Grant.

“Thank goodness she knew what to do,” said Roger. “It’s hard to describe the feeling of hearing your child was in peril and you weren’t around to do anything about it.”

“We thank Jaimie for recognizing that the student was choking and taking quick action to save the student,” said APS spokesman Frank Bellavia. “We are extremely grateful to her.”

“We had the honor of recognizing Ms. Sapp and students from Jamestown [Elementary] today for their heroic actions that saved a student’s life,” said Arlington County Fire Department in a tweet. “For identifying there was an emergency and springing into action she was given a citizens award.”

We had the honor of recognizing Ms. Sapp and students from Jamestown Elem today for their heroic actions that saved a students life. For identifying there was an emergency and springing into action she was given a citizens award. #Hands2Hearts #community @LifeatVHC @HeartOfGWR https://t.co/7U1KGdWvCa

Roger said the experience was a reminder of how rusty his family was on other first-aid procedures like CPR, and he’s now planning to organize a group CPR certification course with the Jamestown Elementary PTA.

Bellavia said all APS teachers are required to learn basic first-aid and CPR, including the Heimlich Maneuver.

During today’s phone call with ARLnow, Roger said the incident was no big deal for Grant, who was spending his Monday morning — on the first week of summer break — biking.

“We’re hugging him a lot more than we would normally,” Roger said of Sapp. “We’re just very, very happy and proud of her.”